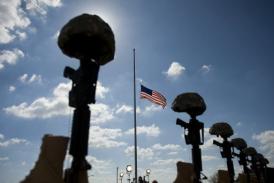 (AFP) –  FORT BELVOIR, Virginia — A government attorney insisted Major Nidal Hasan, charged with the November 2009 shooting spree, had to conform to US Army regulations prohibiting beards and that the judge in the case was well within his rights to issue an order for the suspect to be forcibly shaved.

“This is akin to wearing a sign that says ‘F-you judge,'” Captain Kenneth Borgnino told the Army Court of Criminal Appeals.

Hasan’s bushy “unkempt” beard is a “flagrant violation” of military grooming standards and the judge had clear authority to maintain decorum in his courtroom, he said.

“It is an offense to uniform, to the army… to the panel (jury), to members of the gallery and to the victims,” Borgnino added.

The beard could also be interpreted as a defiant act by Hasan to associate himself with Islamic extremists, the lawyer said.

With legal disputes over Hasan’s beard holding up the trial, a seven-judge panel listened to more than an hour of arguments over whether the accused had to show up in court clean-shaven.

A decision is expected within days.

Hasan’s lawyers said the judge presiding over the court-martial, Colonel Gregory Gross, had no legal right to order their client to be forcibly shaved and that the judge’s stance had undermined his impartiality.

“Forcible shaving exceeds the authority of the military judge.”

Hasan has said he grew the beard out of devotion to his Islamic faith and his lawyers say orders demanding that he be shaven violate his civil liberties under the Religious Freedom Restoration Act adopted in 1993.

The defense attorneys also asserted that Hasan’s beard had not in any way interfered with the court-martial proceedings.

“He has sat through several proceedings throughout this trial and not disrupted the proceedings,” said Captain Kristin McGrory.

In other court-martial cases, a judge could enforce military grooming standards if there was a disruption, but Hasan had not seriously interfered with the hearings, she said.

“If the accused is threatening to get naked, that would rise to the level of disruption,” she said.

Judge Colonel Theresa Gallagher asked: “Is not a beard itself a disruption?”

The defense lawyer said the beard did not rise to the level of a serious interference in the proceedings. But the government’s counsel said the facial hair could make it more difficult for some witnesses to recognize Hasan in court.

Hasan’s commanders have ordered him to appear in court clean-shaven but unlike the court-martial judge, have not insisted he be forcibly shaved.

Several judges at the hearing honed in on this point, asking the government lawyer why a judge was venturing into an area that would usually be handled by military commanders.

“Is it appropriate for the chain of command to virtually punt the forcible shaving issue to the judge?” asked Colonel Steven Haight.

Hasan, who was shot by police officers during the rampage and left paralysed from the neck down, was not in the courtroom. He has attended hearings in Texas, where his court-martial is set to take place.

Hasan is accused opening fire at the Fort Hood army base on November 5, 2009, in an attack that killed 12 soldiers and a civilian, and wounded 32 others. If convicted, he could face a death sentence.