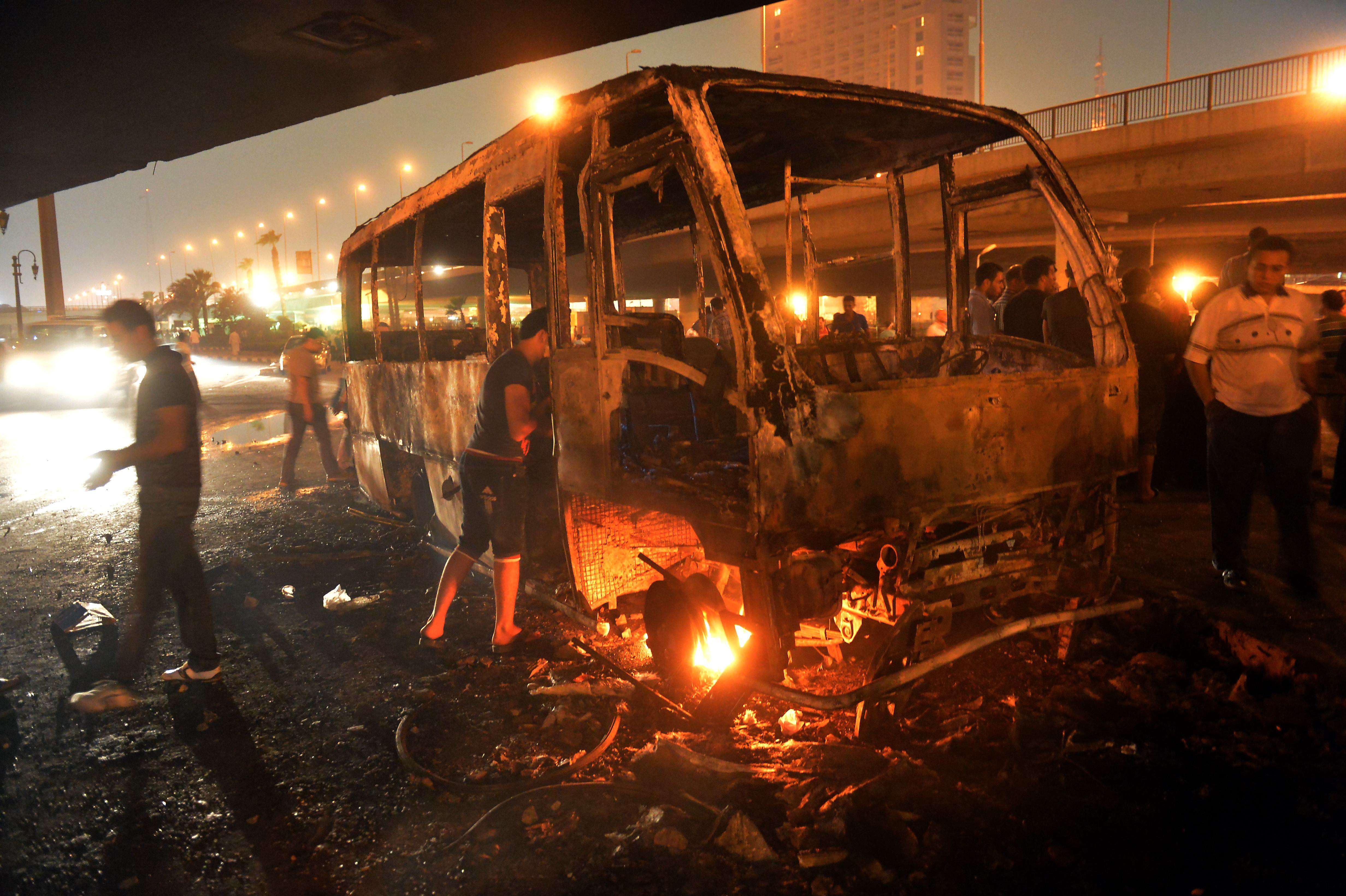 On Friday, protesters from several marches organised by opposition groups such as Al-Dostour party, 6 April youth movement and the Revolutionary Socialists gathered in Tahrir square for a pre-arranged demonstration against the constituent assembly and Morsy’s presidency. The protesters had initially gathered to criticise the overwhelming majority of Islamists drafting the constitution which they argued was not representational, and Morsy’s general handling of his first 100 days in office. The protest was short-lived however the Muslim Brotherhood staged their own protest in Tahrir denouncing the acquittal of 24 defendants who had faced trial for their role in the Camel Battle during the 18 days of the revolution last year.

According to eyewitness reports, clashes erupted after apparent Brotherhood supporters tore down the stage the opposition groups had set up. This was in reaction to the string of chants from the speakers on stage aimed at Morsy. Following this event, protesters on both sides began hurling stones and insults at each other, and fighting broke out.

Since then however, the organisers of the march and the Muslim Brotherhood have given conflicting reports of events. Walid Jibril, one of the founders of the Dostour Party, said he was present in Tahrir and claims the Brotherhood were there and responsible for tearing down the oppoostion’s stage. “Anyone with a pair of eyes could see the brotherhood was there,” Jibril confirmed.

“The brotherhood was chanting that the Freedom and Justice Party and [President Mohamed] Morsy were supported by men,” Jibril said. The Dostour party has yet to issue a statement on this regard and as such, Jibril stressed that it was merely his opinion. “The brotherhood members were imposing their presence on the square, giving the impression they were conquering the area as if it were war,” he said.

The Brotherhood’s official English mouthpiece, Ikhwanweb, denied the presence of their members in the square on Friday. The secretary general of the Freedom and Justice Party, Mohamed El-Beltagy, however, urged the apparently non-existent members to leave Tahrir on Friday. The FJP Vice-Chairman Essam El-Erian announced on Friday, “criminal gangs burned down two buses near Tahrir,” belonging to the FJP and Brotherhood which. Shortly after a new statement was issued via their Twitter handle claiming brotherhood members from outside Cairo had arrived in Tahrir earlier than planned, and were subsequently attacked and dragged into clashes.

A statement published Saturday afternoon on the FJP’s Facebook page lashed out at unnamed ‘parties’ for attacking the small group of brotherhood members that had shown up to the square. The attack, according to the Brotherhood, forced the small group to defend themselves from thugs and criminals. They also claimed in the statement that they had observed thugs with the FJP slogan on their t-shirts causing trouble in an attempt to discredit the FJP. They stated further that they were keeping the peace by arresting some thugs and taking them down to the station on Qasr Al-Nil. Despite their efforts, 71 members of the brotherhood were injured trying to head to the High Court “to establish truth, justice and retribution for the martyrs” of the Camel Battle.

Khaled El-Sayed of the Socialist Popular Alliance Party (SPAP) said Friday’s clashes were a plan by the ruling party to distract from the original protests about the constitution. “The Brotherhood is employing the same tactics used by the old regime,” El-Sayed announced. “[Friday’s] clashes are reminiscent of the Camel Battle, Maspero,” and other such protests where a crackdown has followed.

A joint statement was released on Saturday on behalf of Al-Dostour party, SPAP, the Egyptian Social Democratic Party, Free Egyptians Party (FEP), Youth for Justice and Freedom, the 6 April movement and several smaller groups. It pledged they would continue to hold their demands for a universal “constitution fitting for all Egyptians, minimum and maximum wage laws, justice for the martyrs and the purification of the judiciary.” Speaking on behalf of all groups present, El-Sayed demanded Morsy order a proper investigation into the clashes. He accused the ruling party of attempting to discredit the opposition by showing them as being violent. “We will stick to peaceful means,” El-Sayed concluded.

“This is part of a long chain of events which illustrate the way in which the Brotherhood is trying to manage the state,” Ammar Ali Hassan, a political sociologist and analyst, said. “Their Guidance Bureau makes decisions, and the presidency of the party adopts those decisions… The people then take to the streets supporting those decisions, this already happened during the [premature] announcement of the election results and when Morsy removed [ former commander of the armed forces Field Marshall] Tantawi.”

Ali Hassan added, he believes Morsy is using protests over the acquittal of the Battle of the Camel defendants “to get rid of the general prosecutor to achieve a personal project under the guise of it being the will of the people.”

The Muslim Brotherhood protest against the Battle of the Camel aquittals, Ali Hassan argued, were an attempt to divert the attention away from the protest’ original message of criticism of Morsy’s leadership. “What happened taught the Brotherhood a lesson, which is the game they are playing won’t work for much longer,” he continued. “They came out of the battle losers, and the public can see now that they cannot stand against public opinion.”