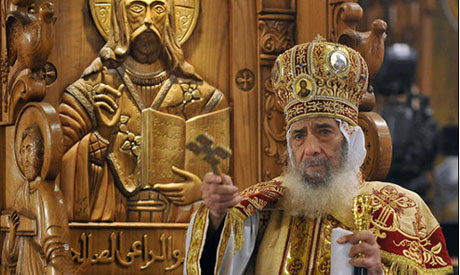 The Coptic Orthodox Church released on Saturday a preliminary list of papal candidates, narrowing it down from 17 candidates to five, following a

The announcement came in a statement by acting pope Archbishop Pachomious, Elder Metropolitan Archbishop of Beheira, in a Saturday press conference.

Following a two week retreat at the Monastery of Saint Bishoy in Wadi El Natroun, a papal elections committee composed of members from the Holy Synod of the Coptic Orthodox Church and the Laity Council eliminated eleven members after Bishop Kyrillos, the Diocesan Bishop of Milan, announced his withdrawal.

From 19 November to 21 November, another church-wide fast will commence and on 24 November 2,405 voters from inside and outside Egypt will submit ballots, choosing from the five remaining nominees.

After a third fast on 26-29 November, a liturgical service will be held on 2 December in the Cathedral of St Mark in Abbasiya, and the top three nominees following the papal election will have their names placed at the altar, where a blindfolded child will select the name of the next Pope of the Coptic Orthodox Church.

The list of nominees initially included seven bishops and ten monks. Debate concerning the eligibility of certain candidates has been brewing within the church long before a list had even been released.

Many factions within the Church maintain that in keeping with canon law, bishops should not be eligible for the papal seat, as they are bound to the dioceses or area they serve. Two bishops remain as candidates.

The current procedure is supported by bylaws that were set in place in 1957 and represent a combination of various methods used by the church during its long history. The current practice has been used to select Pope Kyrillos VI and Pope Shenouda III.