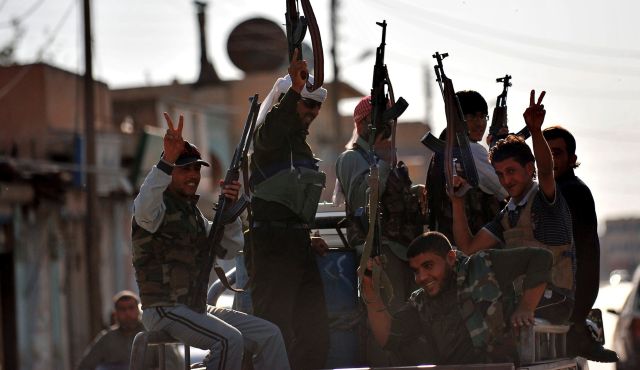 Damascus, (AFP) – Syrian rebels shot down a fighter jet in the northern province of Aleppo on Saturday, a monitoring group and a military defector said.

“The rebels shot down the fighter jet in the west of Aleppo province, where fierce battles are taking place,” Syrian Observatory for Human Rights director Rami Abdel Rahman told AFP. “The jet was bombarding the village of Khan al-Asal.”

A defected military officer in the province confirmed the reports, adding that what he said was a MiG jet was shot down some 10 kilometres (six miles) west of Aleppo, scene of fierce battles since July 20.

Amateur video shot by activists and distributed by the Observatory showed groups of people gathering around a pile of embers, and smoke rising from the scene, as men fired their weapons into the air in celebration.

It also showed the tail of a fixed-wing aircraft, blackened by fire and broken off from the body of the plane.

“People celebrate when planes are shot down because they are used to bombard civilian areas,” said Abdel Rahman.

A second video shot and distributed by activists showed a rebel fighter leading an amateur cameraman to the destroyed remains of the jet.

“These are the planes of (President Bashar) al-Assad!” cried one unidentified man.

On August 30, the rebels shot down a MiG fighter jet near a military airport in the north-western province of Idlib.

Two weeks earlier, the FSA shot down another one in the eastern province of Deir Ezzor.

Experts say the Syrian army has been worn down by an increase in the number of battle fronts and rebel attacks that have cut major supply routes and undermined the regime’s military superiority.

The army relies mainly on its monopoly on air power to slow the progress of the insurgency.