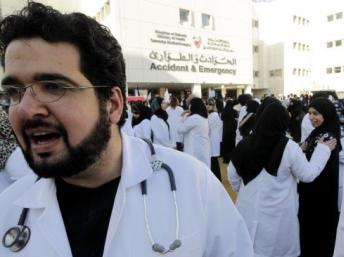 The Shiite medics, who have been in prison since October 1 after the Gulf kingdom’s highest court upheld their prison sentences, called their action “The Lost Justice,” and have stopped taking food and medicine, the lawyers said.

A sixth medic has been released because of time already served.

The medics reiterated accusations that the authorities used “harsh and systematic torture” during months of initial detention in the wake of a deadly crackdown on protests in March last year.

In a statement transmitted by lawyers, they claimed the alleged torture “caused injuries and disabilities whose traces remain on the bodies of the medics.”

The statement urged “all international organisations to demand their release.”

The hunger strikers include consultant orthopaedic surgeon Ali Alekri, who was sentenced to five years, and senior nurse Ibrahim Damastani who was given a three-year term.

Both were convicted of possessing a weapon and of illegal assembly.

The remaining medics were found guilty of illegal assembly and inciting hatred, and were sentenced to between two months and a year.

Three other medics’ convictions were also upheld by the high court, but they had already served their sentences.

They were among 20 doctors and nurses who worked at the Salmaniya Medical Complex in Manama during the predominantly Shiite month-long uprising against the kingdom’s ruling Sunni dynasty in February 2011.

All 20 were first charged and convicted by a quasi-military court formed after the government crackdown on the protests, and many initially received harsh sentences of up to 15 years.

Nine were acquitted by a lower appeals court in June.

According to the International Federation for Human Rights (FIDH), a total of 80 people have been killed in Bahrain since the violence began on February 14, 2011.