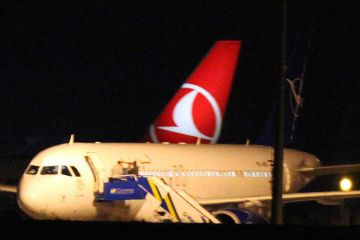 “Yesterday (Saturday) we closed our airspace to Syrian civilian flights as we have previously done for Syrian military flights,” Davutoglu told journalists.

“As we have established that civilian flights were being misused by the Syrian defence ministry to transport military material, we sent a note yesterday to the Syrian side.”

Ankara’s move came after the Syrian state news agency SANA reported on Saturday that a flight ban has been imposed on Turkish flights.

Ankara has taken an increasingly strident line towards its neighbour since a shell fired from the Syrian side of the border killed five Turkish civilians on October 3.

Syria accuses Turkey of channelling arms from Gulf Arab states to rebels fighting its troops, who have been under mounting pressure across large swathes of the north, including in second city Aleppo.

The flight ban went into force from midnight (2100 GMT Saturday) “in accordance with the principle of reciprocity”, SANA state news agency said.

Since last Wednesday, Turkey had warned its airlines to avoid Syrian airspace for fear of retaliation for that day’s interception of the Syrian Air passenger plane by Turkish jets on the allegation it was carrying military equipment.

Ankara has taken an increasingly strident line towards its neighbour since a shell fired from the Syrian side of the border killed five Turkish civilians on October 3.

The tit-for-tat flight bans came after Turkey this week intercepted a Syrian Air passenger plane from Moscow on suspicion it was carrying military equipment for the regime.

Ahead of this week’s flare-ups, Syria discussed with Russian diplomats an idea of setting up a joint committee with Turkey to oversee security on their shared border.

To this end, Russian Foreign Minister Sergei Lavrov had pointed out the necessity of “a direct channel of communication” between Turkey and Syria.

“The Assad regime should first set up channels of dialogue with its own people,” the minister said.

“As long as it has not made peace with its own people, as long as it fails to put the will of the people first or show respect for the right to life of its people, opening doors to dialogue makes no sense to us,” said Davutoglu.