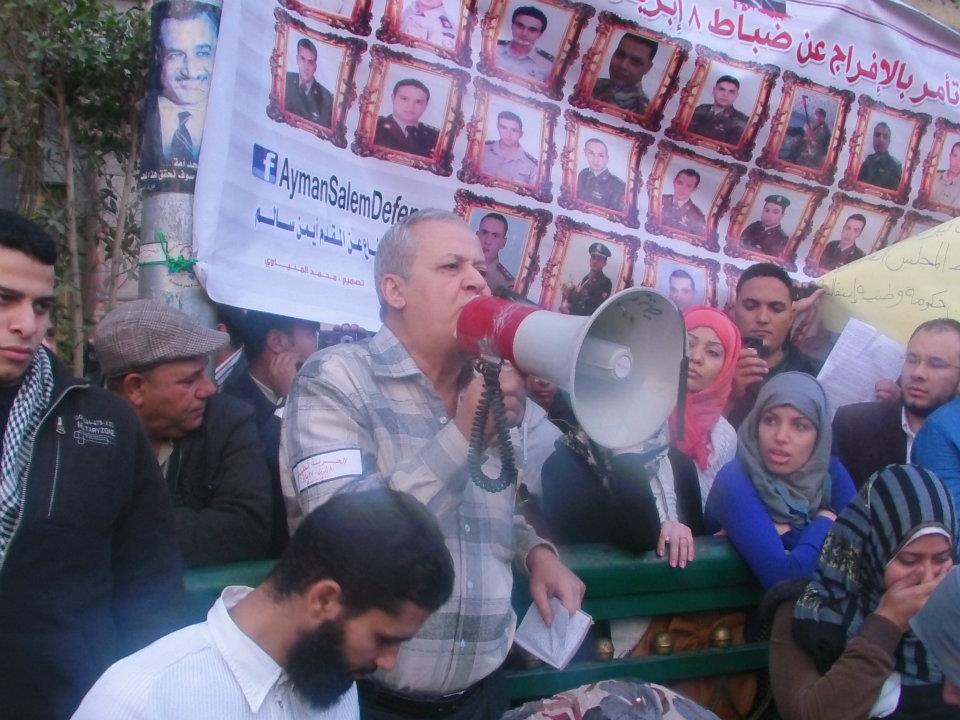 Mohamed Wadi’, an 8 April officer arrested for “supporting the revolution,” was moved back to military prison after spending almost a month in a psychiatric ward.

Sa’ad has been on a hunger strike since 3 October, calling for the release of her son, and has also sent a telegraph to President Mohamed Morsy. Eight other people in Dakahliya are also on hunger strike, in solidarity with Wadi and all officers who have faced ill treatment for siding with the revolution. According to Sa’ad, Wadi’ was in a poor condition when she saw him on Saturday and that a prison official had told him he will not be released any time soon.

Nisrine Yousef, from the Movement of the Supporters of the 8 April Officers, said once an officer is moved to hospital, they are expected to be released, which is why she doesn’t understand why Wadi’ was sent back to prison.

Morsy issued a law last week granting amnesty to those arrested for offences related to supporting the revolution, regardless of whether they are in the military or civilians. However Mohamed Eisa, a lawyer representing Wadi’, said so far there has been no indication that he will be released.

According to independent newspaper Al-Shorouk, Morsy said 21 of the 8 April Officers have been released and that the preparations for releasing the five remaining in prison are underway. However, Eissa doesn’t believe that the officers will be included in the amnesty. “No one knows anything,” he said.

Wadi’ has been sentenced to five years imprisonment for various charges. Following the release of a YouTube video detailing his story from inside prison, Wadi’said he faced harsher treatment. Mohamed Abdel-Ghani, the coordinator of the Movement for the Supporters of the 8 April Officers in Dakahliya, said after he released the video, he was assaulted and when the people started to put pressure on the authorities, he was moved to the hospital.

“They want the people to think that he is crazy,” he said.

Of the officers who took part in protests in April, May and November 29 were detained, 21 were released, three were retired and five remain in prison. Wadi’ is the only military officer still in prison for taking part in protests on 8 April. A committee will be formed to decide if they can resume their work in the military or be moved to administrative work.