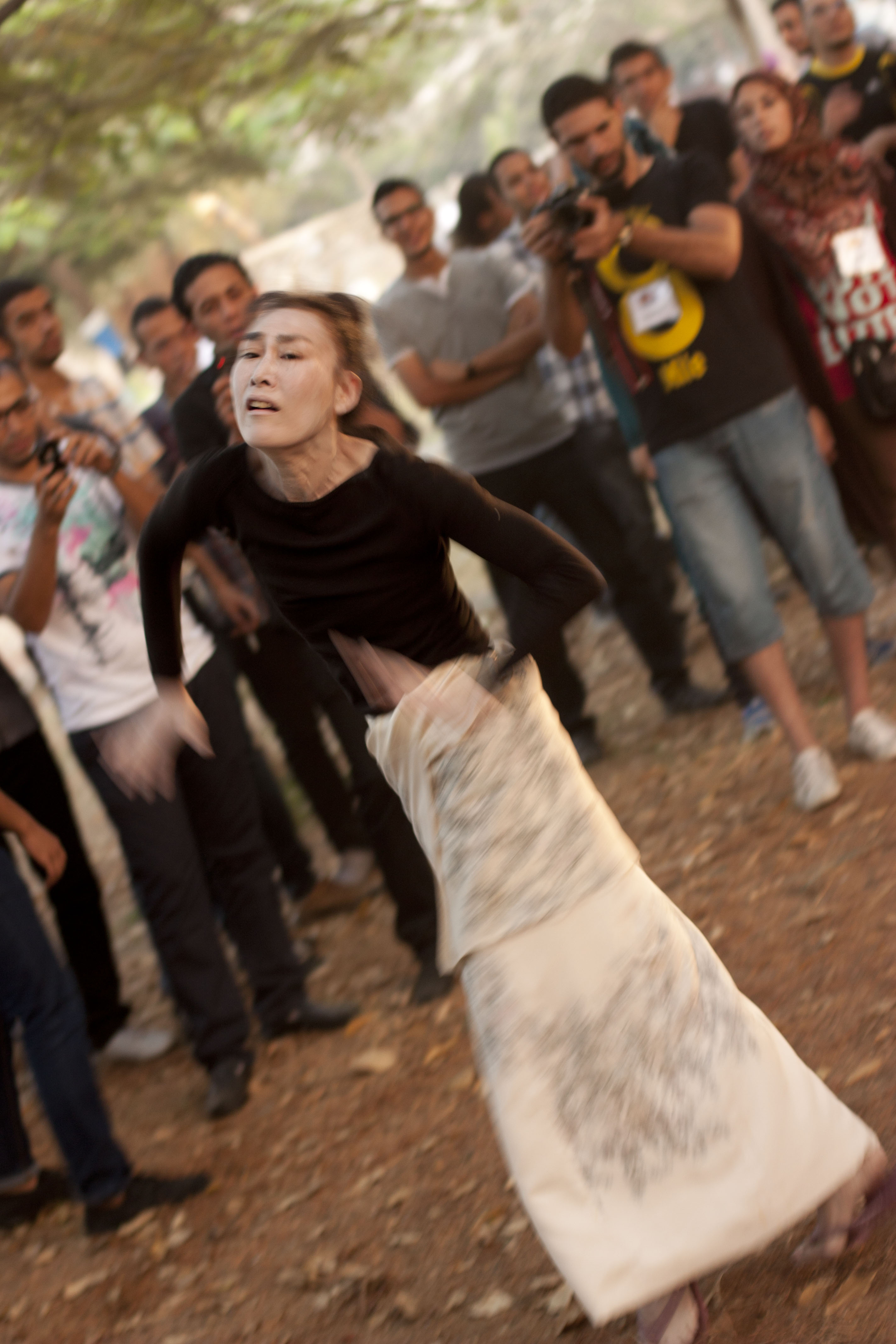 “The slogan is music, art and craft for everyone and this is why the attendance is for free,” said Mohamed ‘Jimmy’ Jamal, Salalem’s lead vocalist and the festival’s presenter. Starting last Thursday, Egypt experienced a cultural exchange of music and contemporary arts for three consecutive days and in three different cities. The ArtBeat Festival is a collaborative event between the Cairo Jazz Club Agency and Darb 1718 Arts and Culture Centre, where the agency managed the music aspect of the festival while Darb handled the arts. “Our agency’s vision, through ArtBeat, is to expand the live music culture outside of Cairo, reaching other governorates,” said Ahmed Al-Fekky, manager of the ArtBeat Festival and events manager at CJC Agency. Combining international music and arts with local talent is the festival’s core concept. Sara El-Redy, marketing manager at the Cairo Jazz Club, said there is a lot of talent in the country, but the key is in establishing the right channels through which such talents are exposed and pushed forward.

The first live act was by 5/8erl in Ehr’n starting their show with a mellow song called Und Wann I Atmosphäre Bin. The performance displayed entrancing chord changes accompanying expressive vocal harmonies. The band focuses on performing groovy songs without having a drummer or a percussionist in the formation and uses traditional Viennese instruments to play soul/pop music. “We are the first band in Austria to do so,” said Bobby Slivovsky, the vocalist. Each member of 5/8erl in Ehr’n performed with sense of percussion in order to compensate for the absence of drums.

The band kicked up their performance with their second song, Schwachsto, which carried a funky vibe. 5/8erl in Ehr’n performed on the first day of the festival as well. The band was astonished by the Mansoura audience, who sang along with the German lyrics, without understanding what they were saying. “The audience was the best public I have ever played for,” said Max Gaier, vocalist. Silvovsky said the Egyptian people fascinate him in how they take actions in order to achieve change, which is different from Austria where people only think about it instead. “The Egyptian young people and the Egyptian movement are inspirational for us in Austria,” said Gaier.

The second band to take the stage was Sandro Schneebeli ‘Scala Nobile’, a quartet from Switzerland performing jazz world music. Where some tunes sounded like smooth jazz, other tunes were quite remarkable for being more Latin fusion. “The people were nice, [musically] educated and interested in our music,” said Dudu Penz, the band’s double bass player.

Ashara Gharby followed, featuring Fady Badr on keyboards as a special guest. Ashara Gharby fused oriental and Nubian music along with afro-beats. The audience’s spirit matched the band’s enthusiasm and people danced and sang along.

6 Spoons 1 Kitchen performed ethnic jazz and the band members were concerned at first about the audience’s reaction to their music but ended up surprised by their positive interaction. With each member coming from a different country, 6 spoons 1 Kitchen form a melting pot of various musical and social cultures. Tunes were characterised by oriental melodies, blending with modern jazz harmonies and Latin percussions. Songs in Portuguese, accompanied by ethnic jazz compositions, attracted the audience, especially the incorporation of oriental scales by the band’s Rayjam, flute and bass solos.

When Egypt’s popular band, Salalem, took to the stage the audience got wild. By the band’s third song, the audience members were on their feet dancing and singing along to the band’s hits. Salalem featured Fady on keyboards and performed songs from their upcoming album. Mellow Maroc followed Salalem, performing a blend of reggae, Rai and funk music. The band’s first song was called Revolution, which was written 10 years ago. Mark Schlumberger, the band’s vocalist and guitarist, said the song was fitting because Egypt is in a time of change. “Real change is only possible if people start changing themselves,” said Schlumberger, referring to the message of the song. The final act of the festival was a performance by Fathy Salama and the ArtBeat guests.

Three workshops took place under the umbrella of the ArtBeat festival. Before the festival started, Grammy award winner Salama held a workshop with some of the festival’s musicians. The workshop took place at Vibe Studios where the artists worked on a collaborated performance. The workshop’s outcome was performed as the final act of the festival. Referring to music workshops, Salama told Daily News Egypt that the proper understanding of the term music fusion is always absent in Egypt. “You should not recognise the components,” he said. “All the elements should fuse together and form one homogeneous being.” The final performance by Salama, his band and the festival guests was a perfect example for the audience of cultures melting together.

Mellow Maroc conducted a workshop for the local musicians at Books and Beans in Mansoura and Jeroen and Ahmed Nazmi from 6 Spoons 1 Kitchen, held an instructional workshop at Vibe Studios that focused on the concept of musicality rather than performing music. “We focused on topics like how to achieve a united sound and how to respect each other while performing and keeping egos to the side,” said Nazmi.

The contemporary arts featured a wide array of artwork from different artists. Megumi Matsubara (Japan) conducted a pottery workshop for blind girls in Egypt and the artworks produced were displayed during the festival. Yumino Seki improvised an impressionistic dance between the people in the parking area of Darb on the final day.

“An exhibition that commemorates Ahmed Basiony’s innovative artwork,” according to May Shehab, director of Darb 1718, was incorporated in the festival as well as an installation by Atef Ahmed. Ahmed wrote the word culture on the floor using rocks and made a painting resembling an Islamic ornamentation on the wall. He said many people in Egypt lack the ability to debate and engage in constructive conversation. He added that such people “throw stones” rather than using “a language of dialogue.”

The pathway leading to the music stage was marked by the festival’s bazaar. Tables and stands along the sides of the path displayed a wide variety of artwork, including pottery, paintings, accessories and other craftwork by people from across the country. Fadwa Attia was the first person in Egypt to draw Arabic shirts. Attia, who studied Fine Arts, wanted to do an open-area exhibition. “I thought the best exhibition would be on people, so I made T-shirts.” The drawings on the shirts, bags and scarves not only featured Arabic writing, but Arabian and Egyptian characters as well.

Though the audience at the beginning of the day did not exceed 200 people, the numbers increased to reach around 2,000 later and the diversity of the festival was highly appreciated by all.