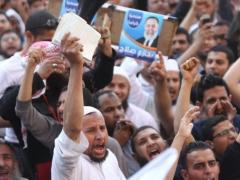 A source within the 6 April movement revealed that a meeting is planned between the Al-Dostor Party and the Popular Currenton Saturday to discuss putting pressure on the Constituent Assembly and President Mohamed Morsy to draft a more balanced and inclusive constitution.

The meeting will focus on the constitution, a draft of which was released on Sunday, the source added, “we have to make a stand.”

The content of the current draft of the constitution has caused discontent among progressives.

Al-Dostor Party was founded with the aims of uniting revolutionary activists who splintered into different political groups, as well as reaching out to other sectors of society including farmers and workers. The Popular Current was established to offer an alternative to the dichotomy of Islamists and members of the former regime.

These groups, like 6 April, now feel marginalised by a Constituent Assembly with an Islamist majority.

Further adding to their feeling of marginalisation was the holding of a Muslim Brotherhood rally last Friday at the same time as protests critical of the government, which resulted in violent clashes.

Al-Dostor Party and the Popular Current condemned the violence and called for more protests on 19 October.

The 6 April movement issued a statement on Sunday blaming the Muslim Brotherhood for Friday’s clashes and President Morsy for failing to prevent them.

“I was there,” said the 6 April source, “and they started the clashes,” adding that blame should placed on Morsy, just as it was on Mubarak for killings during the revolution, and the Supreme Council of the Armed Forces for the killings at Abbaseya and Maspero. “Besides, Morsy [as president] should protect the protesters.”

The movement also called for a return to national unity, a balanced constitution, a cleansing of the judiciary, and accountability for all those who killed revolutionaries.

One of the main reasons the Muslim Brotherhood protested on Friday was to support Morsy’s attempt to fire Attorney General Abdel Meguid Mahmoud, a contentious figure whose termination could have brought the divided groups together, but did not.

The source said the 6 April movement had no position on whether Mahmoud should remain as attorney general. “We believe [Morsy] could have made a law first, and then kicked him out, but he didn’t take it that way,” stressing that their mission is to hold to account those responsible for the death of revolutionaries and to put pressure on the Constituent Assembly.