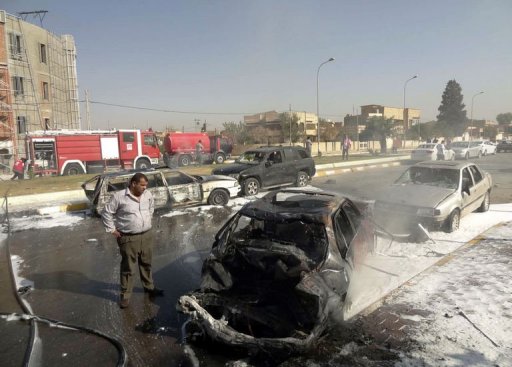 Baghdad, (AFP) — A spate of shootings and bombings targeting Iraqi security forces north of Baghdad on Monday killed at least eight people, while a prisoner on death row escaped from a police station south of the capital.

Gunmen attacked a checkpoint in the town centre, killing two policemen and wounding two more before fleeing the scene, a security official said. A doctor confirmed the toll.

Also in Tuz Khurmatu, a car bomb at one of the main entrances to the town killed a policeman and wounded six other people — five civilians and a policeman, the officials said.

In another gun attack, militants broke into the home of two brothers, both of them anti-Qaeda militiamen, in the desert region west of the city of Samarra, which lies around 110 kilometres (70 miles) north of Baghdad.

They killed them and their father at around 4:00 am (0100 GMT), a police lieutenant colonel and a doctor in Samarra’s main hospital said.

The brothers were members of the Sahwa (Awakening) militia, comprised of Sunni Arab tribesmen who sided with the US military against Al-Qaeda from late 2006, helping to turn the tide of Iraq’s insurgency.

They are frequently targeted by Sunni militants who regard them as traitors.

Another Sahwa fighter was killed by a magnetic “sticky bomb” attached to his car in the town of Hawijah, 230 kilometres (145 miles) north of Baghdad, security and medical officials said.

And in the tinderbox northern oil city of Kirkuk, two car bombs near the provincial government headquarters killed a policeman and wounded eight other people, a security official said. A doctor in the city’s hospital confirmed the toll.

In Baghdad, a shooting at an army checkpoint in the south of the city wounded three soldiers, an interior ministry official said. A medical source said one of the three died.

The attacks came just hours after two bombings late on Sunday near the restive cities of Baquba and Mosul killed a policeman and wounded four other people, security and medical officials said.

Also on Monday, a prisoner, who was on death row in the city of Kut, escaped from a police cell in the nearby town of Sheikh Saad, where he was being held ahead of a court hearing, the town’s mayor said.

Four policemen were arrested in connection with Uday Fadhel Salman’s escape, mayor Munir Zaidan said. Salman had been serving one life sentence and had been sentenced to death for his role in violent attacks, Zaidan added.

Jailbreaks occur relatively frequently in Iraq – on September 27, dozens of convicted Al-Qaeda fighters escaped from a prison in the city of Tikrit, after a deadly assault claimed by Al-Qaeda front group the Islamic State of Iraq.

Violence in Iraq is dramatically lower than at its peak in 2006 and 2007, but attacks remain common, especially in Baghdad and north of the capital.