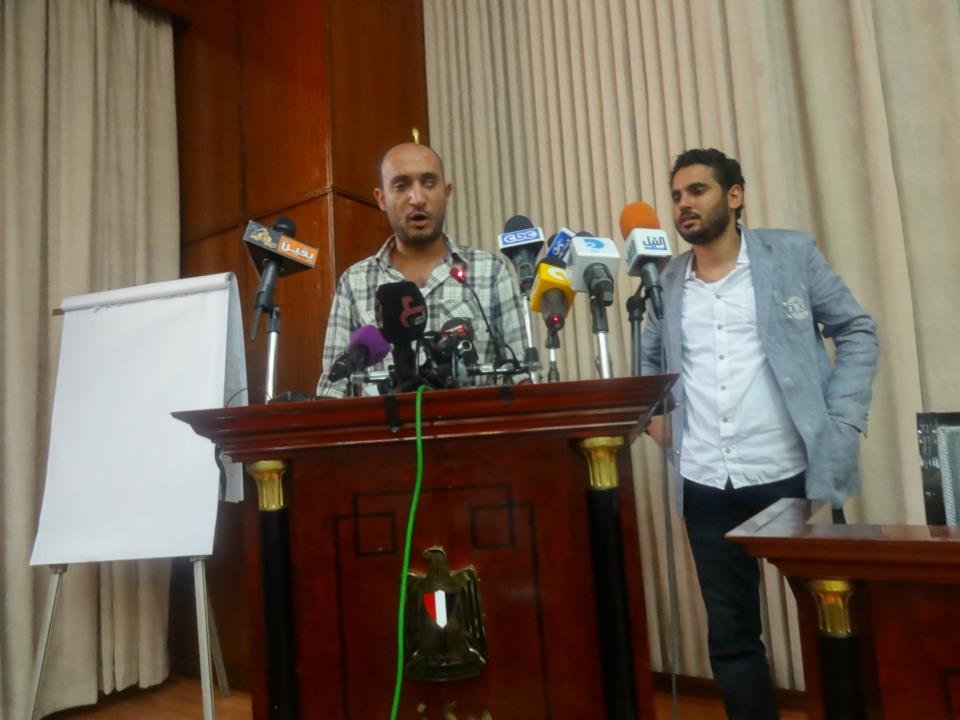 A coalition of progressive parties including Al-Dostour Party and members of the Popular Current reiterated its intention on Tuesday to continue protesting on Friday 19 October and criticised the Freedom and Justice Party (FJP) and the Muslim Brotherhood for tactics used last Friday in clashes in Tahrir Square. Representatives from a wide range of parties accused the Muslim Brotherhood of practicing the same tactics used by the dissolved National Democratic Party (NDP) under ousted President Hosni Mubarak.

“Those who died [in the revolution], died for all Egyptians,” said former member of parliament  Mostafa El-Guindy, who went on to read the joint statement that had been released by Al-Dostour Party and the Popular Current earlier this week. El-Guindy outlined the group’s account of what occurred this past Friday and proceeded to lay out the group’s main demands that it plans on voicing in Tahrir Square this Friday.

“We are all partners in the revolution,” said Amr Helmy of the Civilisation Party, who criticised the makeup of the Constituent Assembly and Morsy’s government. “All Egyptians must have a role in the country’s decisions.” Helmy claimed that the country needed a wave of protests similar to the Kefaya Movement in 2005 to enact true reforms and change. He claimed that a party that did not win a majority in the now dissolved parliament should not have as much as control as the FJP currently holds over the current government.

Bassem Kamel of the Social Democratic Party told reporters that Muslim Brotherhood members violently occupied Tahrir Square to intentionally drown out the message that demonstrators critical of Morsy and the Constituent Assembly had come to voice. Kamel said responding to a critical protest with force was the action of a fascist regime that did not have freedom on its agenda, did not represent its people and ignored other factions’ contributions to the Constituent Assembly.

Kamel was also critical of unachievable promises made by Morsy in his first 100 days in office. “We knew that everything couldn’t be solved in 100 days, but he said it,” said Kamel. “If those who rule don’t realise the seriousness of the country’s problems, then we have a disaster.”

Leftist activist Khaled Abdel Hamid said the next steps between opposition forces must be unified and clearly planned. “We will not permit the manifestation of the former regime under the Muslim Brotherhood,” he said.

The Muslim Brotherhood’s primary concern was to simply occupy the position the NDP held before the revolution, claiming that neither the group nor its political wing the FJP, were interested in real reforms, according to many at the press conference.

“No one is above criticism,” said activist Ahmed Harara of Al-Dostour Party. “Morsy is a public servant.” Harara said no senior government officials had been held accountable for a wide range of human rights offences and that security officials were still torturing civilians under the current government.

“President Morsy needs to remember that he is a transitional president,” said co-founding member of Al-Dostour Party Gameela Ismail. She argued that as a transitional leader, Morsy has no right to occupy or tear down institutions, only to reform them.

The group announced a plan to hold three marches in different neighbourhoods of Cairo that would eventually meet in Tahrir Square. Following protests in the square, two marches against the Constituent Assembly and in support of social justice would leave the square and move towards the Shura Council and Abdeen Palace respectively.

The press conference was the third staged by the group in the aftermath of Friday demonstrations in Tahrir on 12 October that left over 100 injured protesters after clashes broke out between supporters and detractors of Morsy.

Demonstrations staged by the group on Friday will be held under the slogan “Egypt is not a manor… it is for all Egyptians” and call for a more representative Constituent Assembly and sweeping social and economic reforms that address human rights violations by the government and growing poverty throughout the country.