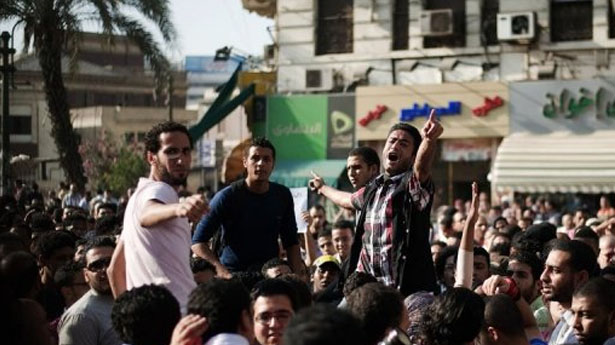 Al-Nour Party member serving in the Constituent assembly dismissed claims on Wednesday that he had called for a protest on 2 November calling for implementation of Shari’a.

Younis Mkhion, a member of the basic principles of the state committee, was rumoured to have called for a protest against the draft constitution due to several articles which do not correspond with Salafi ideology, as well as to call for the resignation of the attorney general for his handling of several high-profile cases related to the revolution.

The chairman of Al-Nour party, Emad Abdel Ghaffour, also denied the claims, saying that protesting was only a last resort.

“We have not yet made such a decision,” Abdel Ghaffour said, “and we do not want to make such a decision.” Al-Nour party is currently reviewing the draft constitution will be presenting proposed amendments to the Constituent Assembly. “God willing we will come to an agreement and we will not need to go to the streets.”

Mkhion said that no such decision had been made because the constitution is not yet finalised and should not have been released to the public. “Legally, this is more of a primary reading than a draft copy [of the constitution],” he explained. “Most articles are still being negotiated and researched and we have yet to reach an agreement on all of them.”

“There are always casualties in protests,” Abdel Ghaffour said, insisting that discussion of the constitution is the only way to make legitimate change.

The head of the Asala Party, Adel Afify, said that there are several issues within the current draft of the constitution that are unacceptable, such as the wording of Article 2, which states that “Islam is the state religion, its official language Arabic and the principles of Islamic Shari’a are the main source of legislation.”Afify wants the article to stipulate that the ‘provisions’ of Islamic law, rather than the ‘principles’ of Islamic law, are the primary source of legislation.

“Al-Azhar should be the only reference for Islamic legislation,” Afify said. “Suppose there is a lawsuit at the Supreme Constitutional Court that is related to Shari’a,” he explained. “The court should refer to the Shari’a immediately so as to not waste time.”

The drafting of the constitution has gone through several reforms since the process began last year. The first Constituent Assembly was dissolved and the current assembly may yet share the fate of its predecessors when the Administrative Judiciary Court reconvenes to decide its fate next Tuesday.