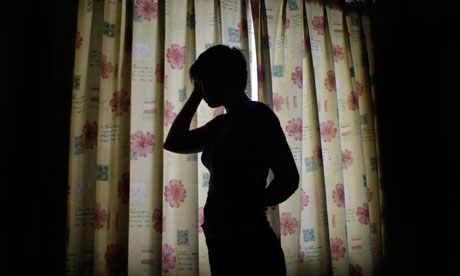 Conservative members of parliament have argued that human trafficking does not exist in Egypt but Mary (not her real name) knows this is not true.

She is one of dozens of women who end up in shelters in Egypt after being sold into domestic slavery and appalling working conditions by recruiters.

According to human rights groups, Salafi MPs have successfully argued for the removal of an article from Egypt’s draft constitution that explicitly prohibits the trafficking of women and children, claiming that trafficking does not exist here despite overwhelming evidence to the contrary. Shelters such as those run by the National Council for Childhood and Motherhood and the Indonesian Embassy in Cairo are constantly full, with representatives dealing with a litany of cases ranging from physical and sexual abuse to treating workers as slaves.

The article has been replaced with the more general prohibition of “violations of women’s and children’s rights,” Human Rights Watch said in a statement.

“It is particularly reprehensible that committee members should bow to pressure to exclude language criminalising trafficking of women and children when this is not only a serious crime under international law but also under Egyptian law, and is clearly happening.”

Mary is one of those who have suffered as a result of the criminal networks who traffic in humans and the Egyptian households who demand the labour.

The 30-year-old mother was recruited in Jakarta in December to work in a supermarket or hospital, as she had done in Saudi Arabia previously, but ended up as a house slave.

Wanting to remain anonymous because her recruiters threatened violence against her family if she talked, she says that when she arrived she was taken to a big home in New Cairo and put to work as a domestic slave.

During her ordeal she says she slept on the kitchen floor with a blanket and no mattress from 3am to 6am, was fed a piece of bread for breakfast at 1pm and left-overs for dinner at midnight.

She was regularly beaten about her head and back, mainly by the housewife, and locked inside when her employers left, she said.

She went without her salary for the entire seven months, she said.

Eventually she refused to work and her employers responded by beating her and refusing her food, before eventually returning her to the recruiter, who Mary knows only as Rania.

She was taken to another house for two months where she was treated better but still overworked, managing two houses. She managed to flee to the embassy when her employers left one day and left their keys behind.

She demanded her wages from her first employer but they told her they would only pay if her Rania gave them back the $6000 they had paid for a worker, though Mary believes that was only an excuse.

Mary remains at the Indonesian Embassy as she does not have a passport, while embassy officials are yet to find her former employers. Mary says she does not know how to get to the house and no longer has her first employer’s phone number.

While Mary remains angry, she was buoyed by the news that Idham Abu Bakar, the mastermind behind a trafficking ring in Indonesia and the man who recruited her, had been arrested, largely based on evidence collected by the Indonesian Embassy in Cairo.

“I want him to be in prison forever,” Mary said.

Trafficking in domestic workers is just one form of trafficking in Egypt, with forced marriage, prostitution and begging other forms, and Mary is one of many victims.

Kristin Dadey, the Counter Trafficking Programme Manager for the International Organisation for Migration (IOM) in Cairo said their shelter, which is run by the National Council for Children and Motherhood, has been full since it opened last year.

The female-only shelter has a capacity of 12 and since it opened, just prior to the revolution, it has remained full, mostly with poorly-treated domestic workers from Africa, the Philippines and Indonesia.

Almost every victim had psychological or medical issues that needed to be addressed when they arrived and the government and IOM have established a victim recovery unit, where victims can receive comprehensive medical treatment.

“It shows that the government is actively identifying victims and doing their job in implementing this provision that the state shall provide shelter to the victims of trafficking,” Dadey said.

Between its opening in September 2011 and last month, around 252 victims were treated. They had blood work, chest x-rays, gynaecological exams and STD check-ups. Further treatment was based on the test results.

The tests revealed cases of STDs, HIV and severe cases of physical abuse where domestic workers had been so badly beaten that they arrived at the shelter with broken bones. They also saw women who needed treatment for injuries sustained after jumping from windows to escape.

Another case was that of a 17-year-old African girl who had been a domestic worker since the age of 10. Her employers were wealthy Egyptian doctors who kept her locked in a room when she was not working and deprived her of any contact with the outside world.

The girl was placed in IOM care after being identified as a trafficking victim by police; she suffers from depression and wants to go home. Anti-trafficking officials are gathering evidence before she can return home, in a bid to prosecute the couple and get the girl’s salary.

Ali Andika Wardhana works with victims of trafficking, including Mary, at the Indonesian Embassy in Cairo.

He says the Indonesian government tries to stop its people coming to Egypt because of the law against foreign domestic workers.

It has outlawed recruiters in Indonesia from recruiting workers to come to Egypt, with agencies found to be in violation of this law subject to prosecution or being closed down, depending on the severity of the case.

However, there is high demand in Egypt for foreign workers “and because of these people we are seeing a number of individuals recruiting and sending [workers] from Indonesia to Egypt”.

Andika Wardhana said almost every victim they interviewed was not aware that it was illegal for them to be here.

“We also found that in some instances that they were supposed to be sent to destination countries such as the Emirates or Qatar but were sent here instead.”

In other cases victims thought they would be working in the formal sector for supermarkets or restaurants before ending up as domestic servants.

Authorities are constantly targeting those who traffic the workers and Andika Wardhana said earlier this year a Bahraini man was caught at Cairo Airport smuggling women from Indonesia and the Philippines into Egypt.

Officers at the airport became suspicious because the man had sponsored a number of previous victims.

“He was caught because he had repeatedly entered Egypt with girls from South East Asia.”

He was found to have brought in 16 women and was charged with people trafficking, though it is believed he was a low-ranking part of the operation, Andika Wardhana said.

While the illegal status of the victims makes it difficult to sue their employers, Andika Wardhana said around 60 per cent carry out successful complaints and get their money, including one woman who received EGP 50,000 from her employer.

Andika Wardhana said the woman was with her employers for less than a year and settled outside of court after she filed a report with police and had a medical report to back up her claim.

The woman was subjected to serious abuse and beaten without reason, normally by the lady of the house, Andika Wardhana said.

She managed to get away only after she was pushed out of a second-storey window, landed awkwardly and broke her leg. A neighbour witnessed the incident and took her to hospital where she was able to make the complaint.

“It’s sad. Although we have this law, human trafficking, the police in Indonesia have managed to put some of these people behind bars but seeing the demand being so high I think there will always be someone there who will take the opportunity.”

Not all domestic workers were treated badly, however, Andika Wardhana pointed out.

He said they see between 50 and 80 victims in their shelter every year who usually turn up in taxis or run away and end up at police stations.

The most common complaints are that they are overworked and treated badly and go without pay for months or years, he said.

Andika Wardhana said they were thrilled with Abu Bakar’s arrest.

“It’s been not months but maybe years we’ve been waiting for this to happen.”

Dadey said they were concerned about the moves to remove the article from the constitution.

Egypt has previously gone from a country which denied the existence of trafficking to one with one of the most rigorous anti-trafficking laws in the region.

She said Egypt’s law, signed in 2010, had unique victim protection measures and laid out what the state would do to help a victim, including providing shelter and medical treatment, rehabilitation and reintegration.

Dadey said they were making good progress with police in terms of raising their awareness of the issue and encouraging the investigation of such complaints.

People on the front line, including police officers were almost totally unaware of the law and the IOM has been working with them to raise awareness, she said. Whereas once officers would arrest foreigners found to be employed as domestic workers when they made complaints, more recently there have been cases where specially trained police officers investigated cases and have taken workers from homes instead of detaining them, something Dadey called “a huge step forward.”

“Here you have this new government now who’s questioning whether trafficking exists. That was the position five years ago. Now we know that trafficking exists. Look at what the government has done, it’s come enormously far in recognising it then putting mechanisms in place to combat it… I hope we don’t go backwards in the discussion.”

One person who doesn’t want the law changed is Mary.

She knows trafficking exists and wants to see those responsible for her ordeal and that of so many people like her, punished.

“I want everyone responsible to be brought to justice. I don’t care if I don’t get my salary as long as they get put behind bars,” she said.