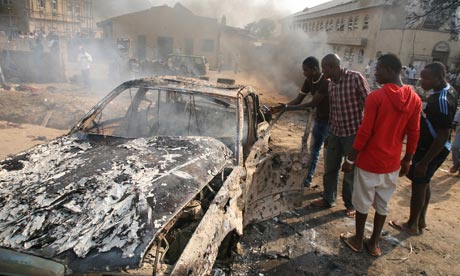 A nurse at the Potiskum general hospital spoke of 20 bodies being brought to the morgue, while residents said three bodies were buried by their families following explosions and shootings in the restive city on Thursday.

“We now have a total of 20 bodies brought in yesterday from the attacks of the previous night. Initially 11 bodies were brought and nine more were received later,” a nurse who asked not to be named told AFP.

“Most of them have gunshot wounds but some had their throat slit. The bodies included that of a police sergeant and a prison warder,” he said.

Residents said the toll could be higher as some relations had taken some bodies from the streets for burial.

“I participated in the burial of three residents who were killed in the attacks. I was at their separate burials yesterday. These are the ones I know. There could be several others,” resident Hamisu Nababa told AFP.

Explosions and gunfire shook the northeastern city Thursday, with residents reporting that several schools and a government building were burnt.

A military source said some buildings had been destroyed by homemade bombs and a security checkpoint was attacked in the latest deadly incident to hit the city, a Boko Haram hotbed.

Police said they were seeking to restore calm in Potiskum and clear unexploded bombs on Friday.

Soldiers have often responded brutally to attacks in northeastern Nigeria and have been accused of killing civilians and burning homes in the past.

It was however not clear if troops were the cause of any of the destruction in Potiskum, and residents spoke of attackers throwing homemade bombs at houses.

In Maiduguri, also in the northeast and the base of the Islamists, petrol bombs exploded, leading to fire that burned 11 roadside shops, the military said in a statement.

One civilian was also shot dead and four others were wounded, it said.

A Chinese construction worker was also shot dead in the city on Friday, a state official confirmed. It was unclear if the civilian the military spoke of in its statement was the Chinese national.

Meanwhile, the military announced the arrest of an alleged high-profile member of Boko Haram at the house of a senator in Maiduguri, without providing further details.

Violence linked to Boko Haram’s insurgency in northern and central Nigeria, including killings by security forces, is believed to have left more than 2,800 people dead since 2009.

Boko Haram has claimed to be seeking an Islamic state in Nigeria, though its demands have repeatedly shifted.

Boko Haram is believed to include a number of factions in addition to imitators and criminal groups who carry out violence under the guise of the group.

Human Rights Watch said earlier this month that both Nigerian security forces as well as Boko Haram may be guilty of crimes against humanity.

Nigeria, Africa’s most populous nation and largest oil producer is divided between a mainly Muslim north and predominantly Christian south.