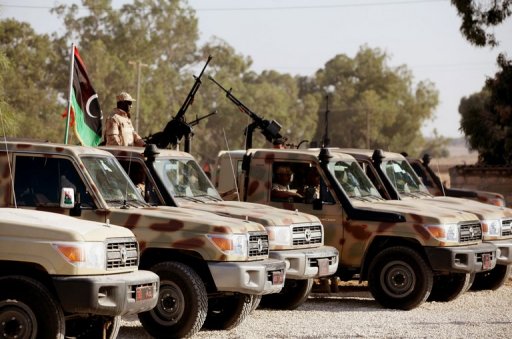 TRIPOLI  (AFP)— Libyan fighters linked to the army kept up their offensive against Bani Walid on Thursday, a local commander said, preventing Libya’s top official from reaching the town to mediate a peaceful takeover.

“These militias are trying to enter Bani Walid,” said Salem al-Waer, a military commander in the hilltop town, adding that his men were fighting back in defence of their land.

He said that fighting and shelling prevented Mohammed Megaryef, president of Libya’s national assembly, from reaching the town.

“Megaryef promised to come today but he was prevented from doing so by these militias,” he added in reference to Megaryef who had been expected to meet with tribal leaders.

Libyan officials in Tripoli could not be reached for comment on the failed visit.

Meanwhile, a military official said regular army forces were being sent from Tripoli to Bani Walid, 170 kilometres (110 miles) southeast of the capital, to take control of the hilltop town.

“A military force will enter the town with the accord of the local tribes,” national assembly spokesman Omar Hmeidan told AFP.

Megaryef had been expected to meet with tribal and military leaders in Bani Walid on Thursday in a bid to negotiate a peaceful takeover of the town by the nascent national army.

Ex-rebel combatants linked to the army, including many from the rival city of Misrata, attacked the oasis town on Wednesday in fighting that left at least 11 dead and dozens wounded, according to sources in both camps.

The attack came exactly one year after former rebels declared the liberation of Bani Walid, which remained loyal to dictator Moamer Kadhafi throughout the 2011 conflict that led to his ouster and killing.

The hilltop town has been besieged and shelled daily by “lawless Misrata militias” operating under the banner of the national army, according to Waer and other residents.

On Wednesday, Shield Libya officers and fighters from the city of Misrata said they had received orders to advance into Bani Walid but the army’s spokesman, Colonel Ali al-Sheikhi, swiftly denied this.

That order, issued by the General National Congress on September 25, calls on the defence and interior ministries to find those who kidnapped and tortured Omar ben Shaaban, 22, a native of Misrata credited with capturing Kadhafi.

It authorised “force if necessary.”

The death of the former rebel stoked tensions between Misrata and Bani Walid, neighbouring but historically rival cities which found themselves on opposite sides of the 2011 conflict.

Acting on the assembly’s order, army troops and several brigades made up of ex-rebels encircled Bani Walid in early October and threatened to “purge” former regime remnants.

On Wednesday, the chief of staff said the army was “ready to enter Bani Walid” and that tribal leaders had agreed to grant its forces passage in order to “impose the authority of the state.”

But many elders and commanders have vowed to repel any advance by “lawless militias” on the town and call into question the neutrality of the national army, which is still in the process of being formed.

They fear that they will suffer a fate similar to that of residents of Tawarga, a town that was accused of supporting the former regime and endured brutal reprisal attacks by forces from Misrata at the end of the 2011 conflict.