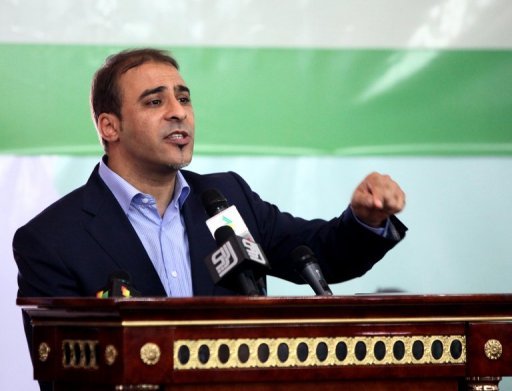 TRIPOLI (AFP) — Clashes in a former bastion of Moamer Kadhafi killed at least 26 people on Saturday as confusion surrounded the fate of one of his most-wanted former aides a year after the dictator’s death.

The government had announced Saturday that Mussa Ibrahim, mouthpiece of the toppled regime, had been captured in the town of Tarhuna, between Bani Walid and Tripoli.

But later a government spokesman said there was no confirmation of the capture and an audio tape surfaced purportedly with Ibrahim himself denying the news.

As fighting around ex-Kadhafi stronghold Bani Walid killed at least 26 people and left 200 wounded, according to an AFP tally, Mohammed Megaryef, president of the national assembly, gave a sombre assessment of the post-Kadhafi period.

Not all areas had been successfully “liberated”, he said, adding that Bani Walid was sheltering criminal elements and die-hard loyalists of the former regime.

Megaryef, Libya’s de facto head of state, warned that loyalists, particularly those sheltered in Bani Walid, continued to pose a threat to the country.

“The campaign to liberate the country has not been fully completed… Bani Walid’s misfortune is that it has become a sanctuary for a large number of outlaws and anti-revolutionaries and mercenaries,” he said.

A few hours after his speech, the office of the prime minister announced the arrest of Ibrahim.

But there was confusion after the later government denial and the posting on Facebook of an audiotape purportedly from Ibrahim, in which he also paid hommage to fallen dictator Kadhafi, who was killed on October 20, 2011.

“On the subject of my arrest today… it is an attempt to draw attention away from the crimes committed by NATO’s rebels against our people in Bani Walid,” said the man identifying himself as Ibrahim. The authenticity of the report could not be immediately confirmed.

Forces linked to the army, most of them former rebels, have this month encircled the hilltop town of Bani Walid in a bid to bring to justice the men who kidnapped and allegedly tortured Omran Shaaban, an ex-rebel credited with capturing Kadhafi.

Witnesses said the nearby town of Misrata’s main hospital was packed with wounded and their distraught relatives, and that ambulances were arriving constantly.

One medical official cited by the official news agency put the death toll at 22, with more than 200 wounded.

Bani Walid’s military commander, Salem al-Waer, told AFP “there was heavy shelling” for a second day on Saturday. He accused the authorities of giving “militias a green light to exterminate us.”

Megaryef said the operations under way “do not target this brave city or its people, rather they target culprits, wanted people, the accused and infiltrators.

“This is not a genocide or ethnic cleansing as erroneously claimed by some. It is a campaign to restore legitimacy.”

Many elders and commanders in the town have vowed to repel any advance by “lawless militias.” They question the neutrality of the national army, which is still being formed and relies on former rebels.

“In the interests of national reconciliation and long-term stability of the country, a mediated settlement is urgently needed,” said the UN envoy to Libya, Tarek Mitri in a statement urging the protection of civilians.

He spoke of the “negligence” in the formation of a professional army and police force and referred to the failure to disarm and integrate former rebels.

He also stressed that delays in reactivating and reforming the judiciary had hampered national reconciliation.

“This situation has created a state of discontent and tension among different segments of society and contributed to the spread of chaos, disorder, corruption and weakness in the performance of various government agencies,” he said.

This had benefitted “remnants of the former regime which have infiltrated the organs of the state, maybe even its leadership, and are plotting against the revolution with the help of others who are abroad.”