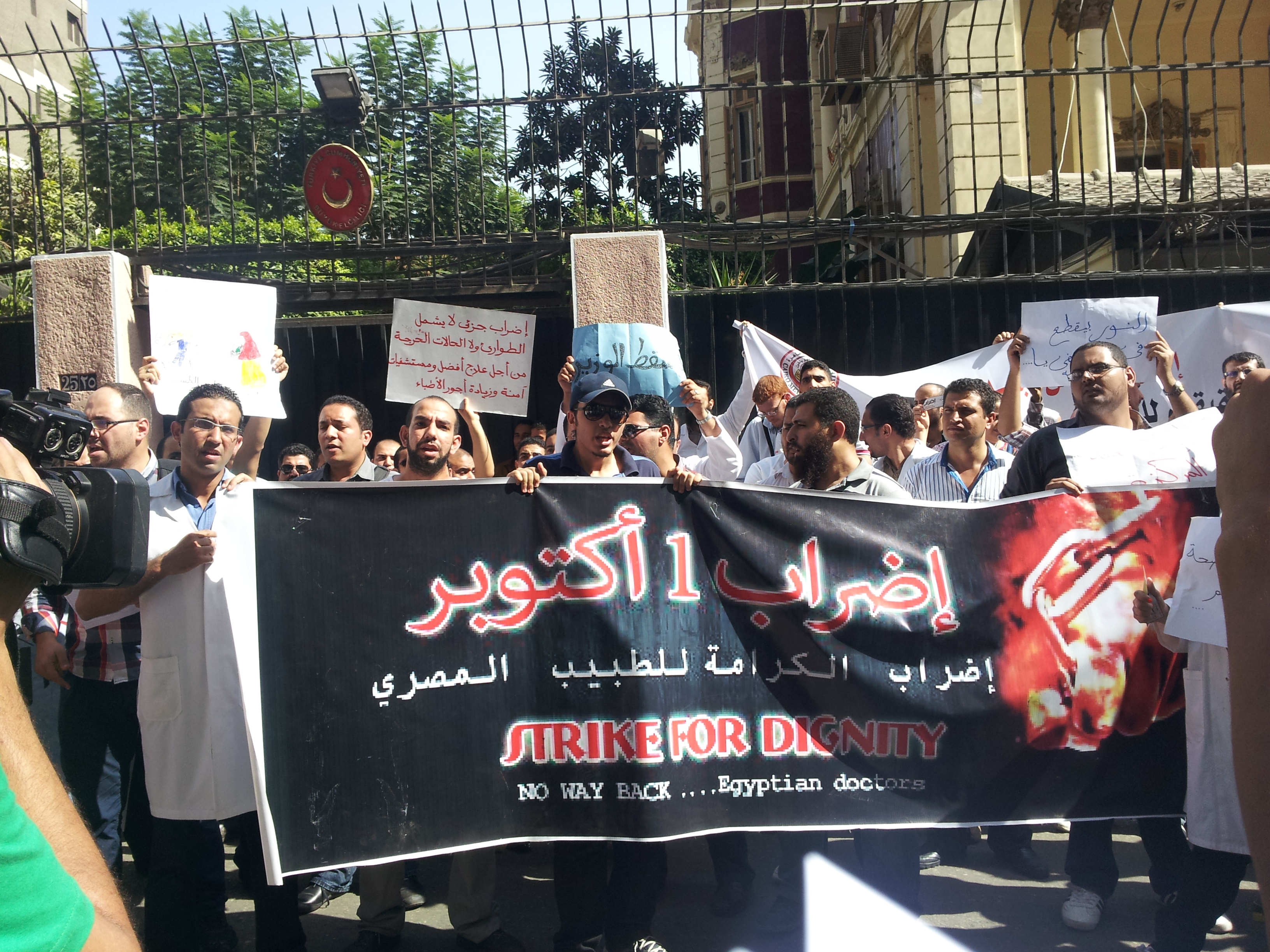 Small groups of protesters gathered every few steps on Qasr Al-Eini Street and in other parts of Downtown Cairo on Sunday, many intent on remaining in place until their demands are met.

Protesters included striking doctors, street vendors protesting the killing of one of their own by police, university administrative staff who travelled from Alexandria demanding better working conditions and postgraduate degrees holders who want positions in universities.

Doctor Ihab Al-Taher, a leading strike figures and member of the committee elected to govern the strike, said the protest symbolised a “scream of rage and a scream of provocation of all those who work in the medical sector against all officials starting from the minister of health to the president.”

Taher said, “just because the doctors are on a civilised strike that doesn’t harm the patients, doesn’t mean that the officials can pretend that they can’t see us and that they can produce false statements and claim that there is no strike.” He accused state-run media of circulating misleading information that incites patients against doctors. Around 65 per cent of outpatient clinics in state-run hospitals are still closed by the strike, according to Taher.

He said the doctors’ demands require political will more than money. The doctors have three demands which prompted them to start a partial strike on 1 October, including an increase of the state budget allocated for health to 15 per cent, “so that we can buy supplies for the treatment of the patients who die every day inside hospitals.” The second demand is to legislate a minimum wage for medical sector workers and the third is to impose harsher penalties for people who attack hospitals. “All of these are within the hands of the politicians and they can achieve them within 15 minutes,” he said.

The Ministry of Health spends EGP 13 billion on wages and bonuses and that 250,000 people work in the medical sector, which means that if the money wass distributed fairly, a cleaner in the sector would make EGP 1,200 a month and doctors’ salaries would start at EGP 4,000, a month, according to Taher. “They are trying to push us into holding a full strike,” Taher claimed, but said this will never happen. The doctors’ strike currently only targets outpatient clinics.

Members of the Revolutionary Socialists, 6 April movement and the Socialist Popular Alliance Party were present to support doctors.

A few dozen protesters gathered at noon at the intersection of Majles Al-Sha’ab and Qasr Al-Eini streets, chanting, “the people want a new prime minister.” All being postgraduate degree holders, the protesters were demanding university positions.

Ahmed Awad, a founder of the General Coalition of Non-appointed Masters and Doctorate Holders, said their problem started after the revolution. “We didn’t ask for university jobs. We have the right to be appointed in the university, because we have the highest degrees, but we asked for administrative jobs that are suitable for our qualifications,” he said.

Awad has met President Mohamed Morsy and said on 5 September he referred their problem to the prime minister. “Nothing was done regarding our issue… nothing at all was implemented,” he said. Following a protest on 10 October Awad said Prime Minister Hesham Qandil gave orders to the Central Agency for Management and Administration to identify all available positions that the protesters might be offered.

The agency provided 9,000 jobs in 66 government bodies and told Qandil that he only had to coordinate with the Ministry of Finance, according to Awad. “Qandil has the letter in the drawer and he won’t sign it, why?” Awad asked.

“I am telling Dr Hesham Qandil, if you can’t handle this responsibility, then leave it and resign,” Awad said. “If these demands are not met, we will go to Qandil’s house in Al-Mesaha Square and we will not let him leave. We will have a sit-in there.”

Awad said many people who were offered positions in the university before the revolution got them through connections.

Sa’adeya Younis graduated over ten years ago, the second in her class, but worked outside the university because she was never offered a position in the university. “The measures for appointment were subject to bribery and nepotism,” she said. While she was able to find another job, Younis said many people were not.

Adel Abdel-Raouf Shaf’ey, a street vendor and one of dozens of protesters who gathered outside the Court of Cassation, demanded the president and prime minister tell all governors that persecution will not make street vendors disappear. “The solution isn’t the security solution, I want to make a living and feed my children, why should I be fired at?” he asked. He proposed that public markets should be built to house street vendors, of which he estimated there were six million in Egypt.

Last week a street vendor, Mostafa Eid, was killed by police, according to protesters. The protest was timed to coincide with a meeting between Eid’s father and his lawyer with the attorney general, according to Eid’s uncle.

Mohamed Salah, who sells goods at Giza Square, said Eid died in his arms. Earlier a police officer had attempted to seize Eid’s goods, according to Salah, and when Eid objected, the police beat him, leaving him lying on the ground. Eid was later released from the Giza Police Department but “the police officer still has his identity card,” Salah said.

Two days later, the police returned in two microbuses, according to Salah. Eid’s father who is elderly and sick was pushed by the police and when Eid came to his defence, he was shot. One of the protesters said he was shot at least three times. “I told a policeman, ‘he is dying,’ Salah said. “He said, ‘so what? Let him die.’”