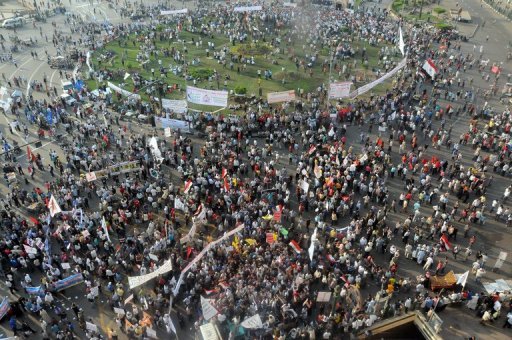 CAIRO (AFP) — A French female television reporter was sexually assaulted during a protest in Cairo’s Tahrir Square, she told AFP on Saturday, the latest of such attacks on women covering unrest in Egypt.

Sonia Dridi, a correspondent for France 24, said a mob of mostly young men surrounded her on Friday while she was on the air and then began to grope her. The attack lasted several minutes before a male colleague managed to pull her out.

“I was groped everywhere. I realised (later), when someone closed my shirt, that it was opened, but not torn off,” she said.

“I avoided the worst because I have a good belt” and a friend helped her out, said the reporter, who eventually found refuge in a fast food restaurant.

“While she was speaking live from the Egyptian capital … (she was) violently attacked and savagely assaulted by the crowd,” France 24 television said in a statement.

The channel added that Dridi was rescued by her colleague Ashraf Khalil, who works as an English-language correspondent, and by other bystanders.

France 24 said the journalists were “extremely shocked” and would file a complaint. The channel said it was doing all it could to get Dridi back to France and had contacted the French embassy in Cairo.

In the past, police have not succeeded in apprehending suspects after similar attacks on women in the protest hub.

The harassment of women — veiled or not — is commonplace on Cairo streets, including obscene remarks and rude gestures.

Recently, witnesses at Tahir Square have reported increasingly serious assaults, even rapes, without getting a reaction from authorities.

In June, a group of men attacked and sexually assaulted several protesters in a women’s march against sexual harassment in Tahrir, epicentre of the uprising that toppled president Hosni Mubarak early last year.

The assaults, which female protesters and journalists say are commonplace in Tahrir Square, had gained notoriety after US journalist Lara Logan was sexually assaulted there on February 11, 2011, the day Mubarak resigned.