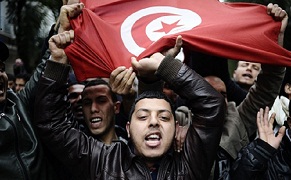 Tunis, (AFP) — More than 1,000 opposition activists staged a protest in central Tunis on Monday against the Islamist-led government and political violence, days after the death of an opposition party official.

It comes on the eve of the anniversary of Tunisia’s first free elections, in a political climate marked by tensions within the national assembly and a stalled new constitution.

Supporters of the leftist coalition the Popular Front shouted slogans such as: “The people want to regime to fall!” and “Jobs, freedom, dignity!” – rallying cries of the revolution that toppled president Zine El Abidine Ben Ali last year.

“I am here to protest against violence. I think that the government has behaved irresponsibly, and like any irresponsible person, it cannot stay in power,” opposition MP Ahmed Khaskhoussi told AFP.

“It does not realise the seriousness of the situation,” he added.

The protest follows the death on Thursday of a Call of Tunisia official in the southern town of Tataouine during clashes with supporters of the ruling Islamists in what the opposition party called a “premeditated political assassination.”

Essebsi’s increasingly popular party claims the government will lose its legitimacy on October 23, a year after the assembly was elected, because it was committed to drafting a new constitution within 12 months.

Security has been beefed up at official buildings, banks and other strategic locations ahead of the anniversary, as a “precautionary measure,” according to the army.