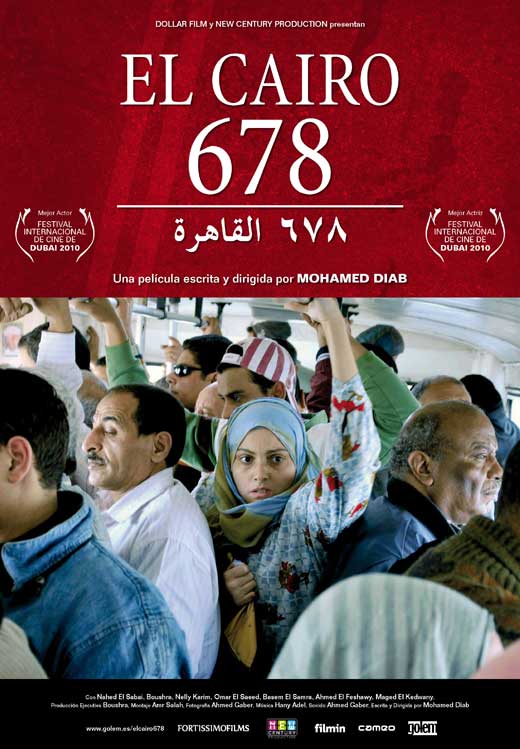 Even though the movie 678 is by now over two years old it keeps drawing attention and this weekend the film received two prizes in the international festivals. The visitors of the African Film Festival of Cordoba Spain honoured 678 with the Audience Award and two days later director Mohamed Diab received the Best Narrative Feature award and $100,000 when his film won the Heartland Film Festival in Indianapolis in the US.

678 was the directorial debut of Mohamed Diab and is the first film to address the rampant sexual harassment that women face on the streets of Cairo every day. Describing the life of three women, who each deal with the harassment in their own way, Diab’s film brought the subject into the limelight for the first time and this created quite a controversy. The acting in the film has been widely praised and Bushra, who portrayed one of the main characters, won the Best Actress award in the 2010 Dubai Film festival for her role in the film that took home the top prize in the Muhr Arab category.

When the film first came out protests were lodged against it by singer Tamer Hosny, who objected to one of his songs being used in the film. There was also an attempt by an attorney to stop the film from being included in the Dubai Film Festival because it portrayed Egypt in an unfavourable light. Claims were made as well by the Association for Human Rights and Social Justice that the film would encourage women to attack their harassers as shown in the film, but the Diab and his team managed to withstand the controversy and the film became a success in the Egyptian cinemas.

Egyptian films are doing well abroad and this trend, which started in the last few years, seems to have reached a higher momentum since the uprising on 25 January. One of the local Indianapolis websites, indystar.com, quotes the organisers of the Heartland Festival as having suspended the rules for Diab’s film, allowing it to compete even if it is older than the rules stipulate. The reason that was given is that Diab was involved in the revolution and therefore could not have taken part in the festival in October 2011.