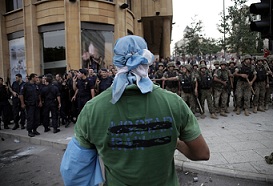 Beirut, (AFP) – Lebanese troops and gunmen exchanged fire in a Sunni district of Beirut on Monday, raising fears Lebanon could be engulfed in sectarian violence after the murder of a top security official blamed on Syria.

The army promptly said it was determined to restore order in Lebanon, with the northern port of Tripoli shaken by fighting between partisans and opponents of Syrian President Bashar Al-Assad that killed five people.

Lebanon has been on edge since Friday, when police intelligence chief General Wissam Al-Hassan died in a Beirut car bombing. That immediately prompted calls for Prime Minister Najib Mikati, whose cabinet is dominated by Damascus ally Hezbollah, to resign.

Amid fears Lebanon will be further affected by the conflict in Syria, the envoys to Beirut of the UN Security Council’s permanent members met President Michel Sleiman and condemned any attempt to destabilise the situation and called for national unity.

The army is “committed to its role of stopping security breaches and maintaining civil order,” a statement from the high command said.

“Recent developments prove decidedly that the country is going through a critical time, and the level of tension in some areas has reached unprecedented levels,” it said.

It will take “resolute measures, particularly in areas of mounting sectarian friction… to prevent the assassination of martyred General Wissam al-Hassan from being exploited as an opportunity to murder the nation as a whole.”

The military also appealed to all political forces to be wary of their words and any calls for mobilisation, “because the fate of the nation is at stake.”

Lebanon is a multi-faith country in which Christians, Shiite and Sunni Muslims each make up about one-third of the population.

It has a complex, but unwritten arrangement under which the president must always be a Maronite Christian, the premier a Sunni and the speaker of parliament a Shiite.

The army statement came as troops responded after being fired on as they tried to clear a road in a Sunni district of Beirut that had been blocked by partisans of opposition leader Saad Hariri despite his calls for them to stay off the streets.

One of the gunmen told AFP a local resident had been killed in the shooting.

In the northern port of Tripoli, a Sunni bastion where opposition to Assad is strong, a woman and four youths died during fighting between Sunnis and Alawites, an offshoot of Shiite Islam to which Assad belongs, security sources said.

A four-year-old girl was wounded, as were three soldiers hit as troops attempted to restore calm.

Clashes have erupted regularly in Tripoli as tensions spill over the border from Syria, where a 19-month-old anti-regime revolt has left more than 34,000 people dead.

In the capital, six people were wounded after the army made a pre-dawn sweep through the Sunni district of Tariq Jdideh in pursuit of armed men, and automatic weapons and anti-tank rocket fire could be heard.

Hariri, a former premier who heads Lebanon’s parliamentary opposition, said he was determined to oust the government of Prime Minister Najib Mikati “by peaceful and democratic means.”

Hassan was laid to rest on Sunday amid calls for Mikati to stand down.

Hezbollah is a strong ally of Assad and of Iran. Its militia, which never disarmed after the 1975-90 civil war, is the most powerful military force in the country.