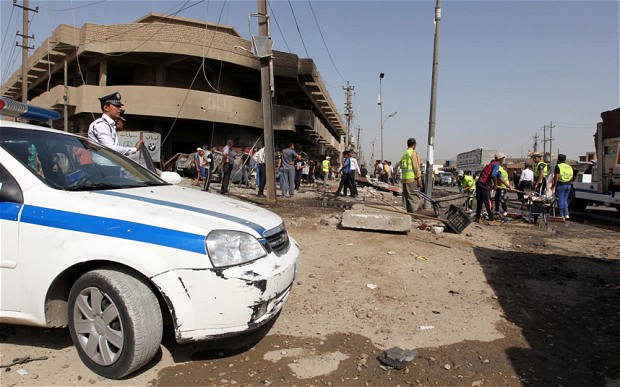 Baghdad – A series of car bombs in two predominantly Shi’a neighbourhoods in north Baghdad killed at least eight people on Tuesday, days before the Muslim holiday of Eid.

The attacks, which also wounded 25 people and damaged nearby cars and houses, struck the adjoining areas of Shuala and Chikouk at around 6.45am local time, days after deadly violence targeted another mostly-Shi’a district in the north of the capital.

Four car bombs exploded in Shuala and three others were set off in Chikouk, an interior ministry official said, putting the overall toll from the attacks at 11 dead and 32 wounded.

The official revised an earlier report that said that the attacks were made up of one car bomb and several mortars.

A medical source, meanwhile, said eight people were killed and 25 wounded, with women and children among the casualties.

Conflicting casualty figures are common in the chaotic aftermath of violence in Iraq.

In Shuala, one car bomb badly damaged a wall of one house and shattered windows in nearby homes and cars, an AFP journalist said.

Security forces cordoned off the site of the attack, and barred reporters from filming or taking photographs. A heavy security presence was also reported at other blast sites.

“We were sleeping, and my daughter and son were preparing to go to school when the bomb went off,” said Abu Ali, the owner of the house that was worst hit by the car bomb.

“Thank God no one was in the kitchen, and no one in our family was badly hurt,” he added.

“Now, we are bringing the materials – we have to rebuild the room.”

Both neighbourhoods struck are majority Shi’a, while Chikouk is home to a camp for internally displaced persons, mostly Shi’a Muslims who fled largely Sunni areas during the worst of Iraq’s confessional violence in 2006 and 2007.

The attacks come after 12 people were killed in nationwide violence on Saturday, with the deadliest incident then also targeting a Shi’a area of north Baghdad.

The latest violence comes ahead of Friday’s Eid Al-Adha holiday. The days leading up to the annual holiday are often marked by a spike in violence.

Killings and assault are down sharply across Iraq from their peak in 2006 and 2007, but attacks are still common, especially in Baghdad and Mosul. At least 250 people have been killed as a result of unrest in each of the past four months.