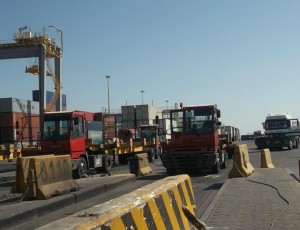 Dubai Ports World (DPW), the company that runs the port in Al-Sokhna which has been closed for over 10 days due to striking workers, announced on Monday that the International Maritime Organisation (IMO) is considering blacklisting the port. The claims have been refuted by the IMO.

It was reported earlier in the day that the commercial manager for DPW, Ayman Badawy announced that the port was blacklisted, although he has since denied this. It is unclear as to what the source of this information is because the IMO has confirmed that it does not have a blacklist of ports. DPW has also confirmed that it will not be negotiating with the recently formed workers union.

Badawy claims that “they are just warning us, it is not official.” When he was informed that the IMO does not have a blacklist for ports he said “this information was sent to me in a fax by the Red Sea Port Authority.” The Red Sea Port Authority was not available to comment on the situation. Badawy also blamed the media for suggesting that he had announced that the port had been blacklisted.

The IMO website states “IMO does not issue a ‘black list’ of any kind. There is no IMO list of ports or flag States which are not in compliance.” Badawy however maintained that he had received a warning saying, “this could be a fake report, I don’t know. It could be an attempt by the media to cause trouble.” He also claimed that “some people have misused the words I have said.”

Badawy also claims that many of the workers have left this workers union since it was set up. DPW also released a document claiming just over 80 per cent of the port workers are against the strike. The document is not dated and it was not possible to verify these figures.

Saud Omar, the leader of the Suez Labour Union (SLU) warned against the use of violence to end the strike saying “the use of any means of violence will not work and will not lead to the desired goal of resuming work.” He also said that he will conduct an investigation in to the running of DPW in Sokhna.

The strike in Sokhna Port started at the beginning of September and initially the workers only slowed their rate of work. The dispute is over pay and the dismissal of eight workers, and when negotiations over these issues broke down, the workers completely shut the port on 12 October.

There was a counter demonstration last Monday by port workers and DPW employees in order to highlight the effects of the strike on the livelihoods of 8,000 families working directly and indirectly with the port.

Badawy confirmed that two ships have been held in the port with the cargo still onboard since the full closure of the port ten days ago. It is thought that amongst the cargo of these ships are perishable food products.

Many companies have threatened to reroute their cargo ships because of the strike.