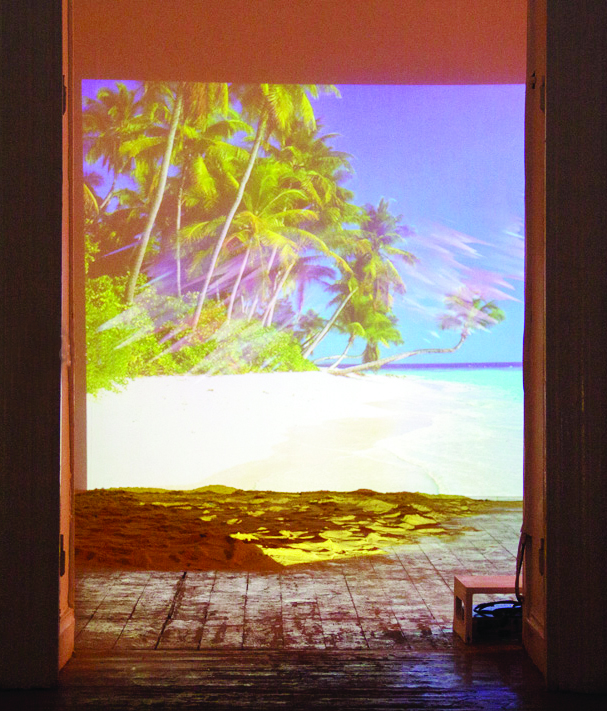 The line between what we perceive with our senses to be the real world and the virtual world has become increasingly blurred. The idea of the world becoming a small village has already come and gone and today we face the realities of a post-globalised world. The internet as a virtual space dominates our physical space and coexists with it, always in interaction, whether in reality or in our imagination.

The interaction of both spaces and the borders between them, whether real or perceived, is what the latest exhibition at the Townhouse gallery explores. The exhibition, IRL, an internet acronym for “in real life”, features the work of four artists, three of whom have never shown their work in Egypt or the region.

One of the artists, Islam Shabana, says for him the exhibition is about doubt. “We cannot be sure of what we are seeing, whether it is real or not. Even the image I used of nature looks as artificial as it does real and who is to say that it is real or original and in what sense?”

Shabana’s piece consists of a familiar screensaver of a tropical island with the water moving in a very artificial way among absolutely still, picture-perfect trees and sand that is projected on the wall. Also projected, but only slightly visible, is a jarring second image that can only be seen as one moves in front of the projector, revealing the interplay between the screensaver and the second image. Lastly, there is a generous amount of real sand on the floor, at the foot of the projection, sometimes giving the illusion that the sand in the picture and the sand on the floor are continuations of one another.

Shabana wants to question the idea of the borders between the physical and the virtual and even the notion of what is really true, independent of our senses. “When I turn away from you, you cease to exist visually so does that stop making you real in some sense to me? Perhaps it is like Plato’s cave and what we are seeing is only what we think to be reality and not actual reality.”

The exhibition has a mesmerising quality to it that captures our imagination regarding what is real and what is virtual. It does not try to place the boundaries between both spaces but merely wants to explore them. Shabana says he is not here to say what the case is exactly. Rather, he is here to ask questions, he says, of the audience. “I want them to doubt. It may or may not be one way or another but is important to pose questions about these concepts that are especially relevant today, and above all doubt.”

The IRL exhibition concludes tomorrow and the exhibition is open to everyone and is free to attend.