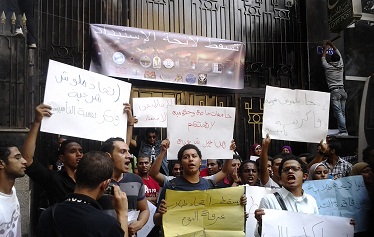 University students protested on Tuesday against the new university bylaws likely to be adopted by the Ministry of Higher Education.

The protest took place in front of the ministry, located in Qasr Al-Eini Street, where students from different public and private universities declared their rejection of the new bylaws, saying they were submitted without taking into consideration the opinions of students.

Amr Hamdy, president of Helwan University student union, said that the new bylaws were mainly drafted by Egypt Student Union (ESU), which is not a legitimate student body. He added that Ahmed Omar, the president of ESU, and Sohaib Abdullah, vice president, are ignoring the demands raised by student unions, monopolising power and the decision making process.

“They are young members of Muslim Brotherhood, who are acting just like the old Brotherhood members. The same case of the constituent assembly is repeated here.” said Amr.

Amr explained that the universities of Cairo, Helwan, Ain Shams and Assiut agreed to a draft version of the bylaws, on the condition of holding a referendum on them. However, ESU submitted a draft of the bylaws to a legal advisor of the Ministry of Higher Education, without holding the referendum.

“We haven’t seen the submitted draft, and we are afraid it might be a different draft than the one we agreed upon. Ahmed Omar submitted the draft and gained approval from the supreme council of universities neglecting us, as usual.” Added Amr.

Ahmed Abdel Rasoul, law student at Helwan University, said the bylaws are now approved by the supreme council of universities, pending approval of the minister of higher education.

ESU held some opinion polls on the bylaws. However, ESU president Ahmer Omar asserted that those polls are merely advisory and might not affect the final draft of the bylaws.

“The bylaws are the student constitution. We can’t adopt our constitution without knowing its articles and clauses. This is nonsense.” added Ahmed.