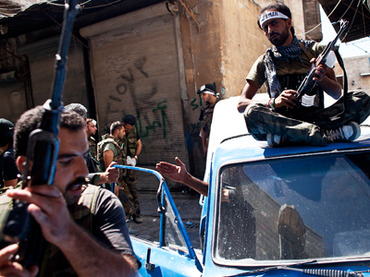 “Neither the rebels nor the regime appear to want a ceasefire, and the daily death toll continues to exceed 100,” Syrian Observatory of Human Rights director Rami Abdel Rahman told AFP.

The two sides to the conflict have given a wary welcome to Brahimi’s proposal but neither has committed itself to the plan, which envisages a ceasefire during the four-day Eid holiday that starts on Friday.

President Bashar Al-Assad in a pre-Eid gesture issued an amnesty on Tuesday for all crimes committed in Syria “up until today,” state television said.

But giving no quarter in the stand-off with armed rebels, the deal excludes “terrorists” – the regime’s term for insurgents seeking to topple Assad.

Despite the violence, the United Nations held to the hope that the foes will observe a truce during Eid, saying it had plans to assemble a peacekeeping force if a ceasefire takes hold.

“We are getting ourselves ready to act if it is necessary and a mandate is approved,” UN peacekeeping chief Herve Ladsous said in New York, cautioning that the plans would need the approval of the 15-nation Security Council.

Brahimi, the UN-Arab League peace envoy, has said he contacted political opposition leaders inside and outside Syria and armed groups in the country and “found them to be very favourable” to the idea of a truce.

However, the Arab League on Monday dampened hopes of a truce, saying the chances of it coming into effect were “slim.”

On the battlefront, warplanes raided a district of the northern city of Aleppo, where fighting broke out in several districts, the Britain-based Observatory said.

The watchdog also reported fighting in Damascus province, the eastern province of Deir Ezzor and Daraa in the south.

The strategic town of Maaret al-Numan in the northwest, which has been the scene of intense fighting since it fell to rebels on 9 October, also came under aerial bombardment, the Observatory said.

On the diplomatic front, a senior Iranian official said Tehran could soon host a “national dialogue” in the region among all the parties to the conflict.

“Representatives of the (Syrian) government and all political and opposition groups will soon begin a national dialogue in a regional country, and possibly in Tehran,” said Hossein Amir Abdollahian, deputy foreign minister for Arab affairs, quoted by the official IRNA news agency.

“Some opposition groups have however rejected this idea, but we are continuing our efforts to persuade them,” he added.

Armed opposition groups reject any Iranian involvement, reflecting the view the United States and some Western and Arab countries hold that Tehran is discredited by its unwavering support for Assad.

Amid the continuing violence,  Human Rights Watch accused Syria on Tuesday of stepping up the use of internationally banned cluster bombs despite denials of using them at all.

“Syria’s denial is meaningless as evidence mounts that cluster bombs are raining down on towns and villages,” said Steve Goose, HRW arms director.

The air force “is imposing a reign of terror on civilians in rebel-held areas across the country with cluster bombs and other explosive weapons,” he added in a statement claiming there had been an upturn in the past two weeks.

The Syrian Observatory said at least 115 people, including 43 civilians, were killed across the country on Monday, adding to a toll of more than 34,000 people killed since the anti-regime revolt erupted in March 2011.

In neighbouring Lebanon, 11 people have been killed in clashes between pro- and anti-Assad camps in the port city of Tripoli since the assassination on Friday of a top security official in a Beirut bomb blast widely blamed on Damascus.

And in Geneva, the UN refugee agency said the number of Syrians fleeing the civil war to Lebanon has now topped 100,000.