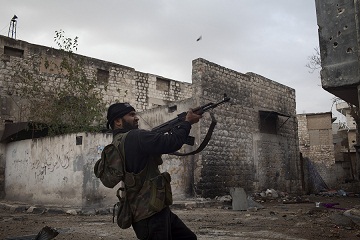 An Egyptian man was killed and another shot through the hand attempting to illegally cross into Syria through Jordan on Tuesday. Two others were detained.

Amr Roshdy, the spokesperson for the minister of foreign affairs, expressed his condolences, and regretted that, despite the governments continued warning to its citizens, Egyptians continued to attempt to infiltrate Syria.

The Ministry of Foreign Affairs released a statement on Tuesday saying the Egyptian embassy in Damascus is finalising a death certificate for one man and monitoring the health of the other. The other two are currently held by Syrian security forces and the embassy is negotiating their deportation. The ministry who refused to comment any further and due to the nature of the event, have also suppressed the names.

Since the onset of the Syrian civil war, foreign fighters have made their way into the country. Although it is currently uncertain how many Egyptians have been involved within Syria, or in which capacity they are operating within the country, Tuesday’s death is not the first of its kind.

Last week, three Egyptians in Homs and Aleppo were killed during clashes between government forces and opposition fighters. It is unclear how the men entered Syria, but the Syrian government claimed they were fighting alongside the rebels, which prompted Egypt to demand their own private investigation into the matter.

On 1 October, the Syrian government told the interim ambassador to Syria, Alaa Abdel Aziz, they had captured eight Egyptians who had crossed into Syria illegally from Jordan. Prior to this, Egypt’s consul to Istanbul had warned of human smugglers in Syria trafficking Egyptians. Roshdy reacted to this news by saying the “last thing the Egyptian embassy in Damascus needs is more Egyptians sneaking into Syria illegally,” saying their presence further complicated the embassy’s efforts to safeguard the passage home for Egyptians trying to escape.

The Syrian government in July claimed they had killed two Egyptian “terrorists” fighting alongside the opposition fighters and Jordanian mercenaries. The government’s media agency SANA published photographs of their passports and driver’s licenses, identifying the two as Abdullah al-Desuqi Musa’ad Bassal and Yasser Abdelrazzaq Kamel Ibrahim.

Since coming to power, President Mohamed Morsy has attempted to negotiate with key regional states to find a solution to the civil war. Included in his talks has been Syria’s firmest ally, Iran, a diplomatic first in international efforts to end the conflict. Turkey and Saudi Arabia, both Syrian detractors, alongside Egypt and Iran, form the Syrian Quartet. Thus far the quartet has had no tangible success in their discussions.

Egypt has had a long history of co-operation with Syria and they were for a brief period of time under one leadership as the United Arab Republic from 1958 to 1961. Since the onset of the civil war, several protests in Egypt have been staged in support of the opposition fighters, who are operating under the umbrella term the Free Syrian Army.