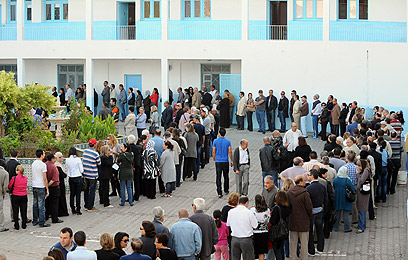 Tunis (AFP) – Tunisia’s leaders on Tuesday sought to defuse political tensions as the country marked a year since the election of the National Constituent Assembly amid divisions and violence that have muted the celebrations.

“We can build nothing on the basis of hate and the challenging of others,” Marzouki told the assembly, calling on the political parties to stop “demonising” each other.

Jebali urged the different political factions to assume their “historic responsibility” and not “push the situation towards crisis, escalation and violence.”

Ennahda, which has led the ruling coalition since its election victory last October, hailed the government’s achievements, pointing to economic “growth,” “improved security,” and “the establishment of freedoms and rights.”

Critics have attacked the Islamists for failing to improve living standards, for a deteriorating security situation and for curbing civil liberties.

Amnesty International on Tuesday said the human rights gains that followed the ousting of president Zine El Abidine Ben Ali in January 2011 were being “rolled back” by the current government, which it said “cast doubt on its commitment to reform.”

The anniversary of Tunisia’s historic elections comes at a time of heightened political tensions between the ruling coalition and the opposition.

Numerous opposition MPs on Tuesday boycotted the parliamentary session in protest at the alleged authoritarian tendencies of the ruling Islamists, with a part of the chamber largely empty.

Beyond the tensions within the legislature, violence on the ground has multiplied in recent months, with Tunisia’s Salafists blamed for a wave of violence and Ennahda accused of failing to rein in the hardliners.

Salafist leader Seif Allah Ibn Hussein, also known as Abu Iyadh, who is wanted over last month’s deadly attack on the US embassy in Tunis, accused the government of being in thrall to “foreign powers,” in a video posted on the Internet.

“Today you are starting to feel, to touch the reality of the secular currents that are subject to the control of foreign powers, which want to force you into apostasy,” said the leader of the radical Ansar Al-Sharia group, addressing the Tunisian people.

Security has been beefed up at official buildings, banks and other strategic locations for the anniversary of the elections as a “precautionary measure,” the army said.

“Recent months have seen increased restrictions on freedom of expression, with journalists, artists, critics of the government, writers and bloggers targeted under the guise of maintaining public order and public morals,” it said.

The rights watchdog said the Tunisian authorities appeared “unable or unwilling” to protect individuals from attacks by Salafists.

It also criticised the “unnecessary and excessive use of force” used to disperse protesters who continue to take to the streets across to express their discontent over the slow pace of reform.

Last year’s ballot swept the Ennahda to power in a coalition government that also includes two secular centre-left parties, Marzouki’s Congress for the Republic and Ettakatol.

Since the historic elections, progress on drafting a new constitution has been delayed by disagreement over the nature of Tunisia’s future political system, while clashes between police and protesters are common.