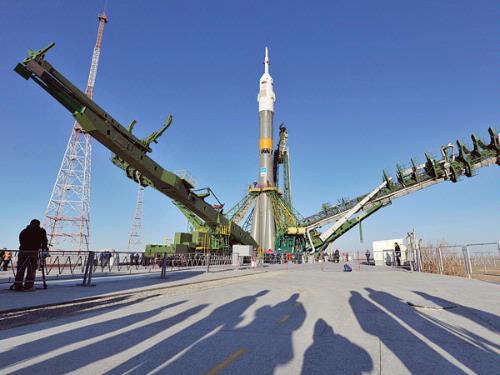 Russia’s Oleg Novitskiy and Evgeny Tarelkin and NASA’s Kevin Ford blasted off in a Soyuz TMA-06M space craft on schedule at 1051 GMT from Russia’s Baikonur cosmodrome in Kazakhstan, an AFP correspondent said.

Russian state television showed live footage of the astronauts strapped into the cramped craft and reading instructions, with their mascot, a toy hippo with a “Russia” logo swinging above them.

“The launch of the piloted ship Soyuz TMA-06M took place at 1451 Moscow time,” the Russian space agency said in a statement.

“The Soyuz TMA-06M separated from the rocket’s third stage as scheduled and was brought into the correct orbit.”

The Soyuz spacecraft is due to dock with the ISS on Thursday at 1235 GMT.

The crew will join NASA’s Sunita Williams, Russia’s Yuri Malenchenko and Japan’s Akihiko Hoshide, who arrived in July and are due to leave in mid-November.

The trio had been set to blast off on October 15 but the lift-off was delayed due to the need to replace a piece of the on-board equipment. The astronauts are set to land back on Earth in March 2013.

The Russian cosmonauts are making their first journey into space, while flight engineer Ford flew to the ISS in 2009 on the US shuttle. He will take over command when Williams leaves in November.

Their time on the ISS will begin with a busy schedule since Russia is preparing to send a Progress supply ship to the ISS on October 31.

The next manned mission to the ISS is due to launch in December.

Russia has a flawless record of delivering astronauts into space in its Soyuz crafts and since the mothballing of United States’ shuttles it is now the only country ferrying astronauts to the ISS.

However one of its unmanned Progress ships taking supplies to the ISS crashed into Siberia in August last year after its launch on a Soyuz.

Russia is also struggling to overcome a series of technical problems that has dogged its satellite launches, prompting heads to roll in its space industry and Prime Minister Dmitry Medvedev to criticise money being “thrown to the wind.”

In August this year, a Proton-M rocket failed to launch two satellites into space.

Last year a huge European satellite launched on a Proton-M rocket failed to reach the correct orbit and was lost, causing the temporary grounding of the rockets, while a military satellite was also sent into the wrong orbit.

The failures were particularly embarrassing as Russia was celebrating the 50th anniversary of the first man going into orbit, Yuri Gagarin.

In 2010, a Russian rocket carrying three satellites for its GLONASS navigation system was sent on the wrong trajectory and the satellites crashed into the Pacific.

Three astronauts blast off from Kazakhstan for four months on ISS