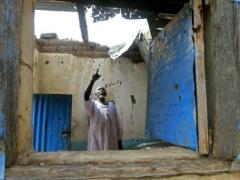 Khartoum – Rebel shelling killed two children in the capital of Sudan’s South Kordofan state on Tuesday, the army said, in what insurgents called retaliation for government air raids on villages.

The attack, confirmed by witnesses, was the second time the Sudan People’s Liberation Movement-North (SPLM-N) has struck the capital Kadugli this month. An unprecedented October 8 barrage killed seven women and children, according to official media.

“I just want to confirm to you that there is a response from the SPLM-N this morning,” Arnu Ngutulu Lodi, spokesman for the ethnic and religious-minority rebels, told AFP.

“We are responding with mortars.”

The army reported that two children were killed and eight people wounded, but analysts say casualty figures from either side in the war should be treated with caution.

A witness in Kadugli said he saw four people hurt by the shells that came from outside the capital and landed around the town centre from 9:00am.

“My uncle’s house was hit by a shell and burned,” said the witness, asking not to be named. He had no details of the damage because he was fleeing in his car.

“I heard about 20 explosions and I saw one shell hit a road-building company,” another Kadugli resident said, also without giving his name. “Now most of the residents are fleeing the town centre.”

“Between 18 and 21 October… the villages of El Labu, Tablu, El Hibeel, El Atmour and Umm Serdiba in the locality of Umm Durain and the town of El Buram, were under extensive aerial bombardments,” he said in an earlier statement, issued Monday.

The bombs mainly hit farms and livestock but three children were wounded, the statement said, vowing to use “all possible offensive scenarios” against government forces.

“We have heard also that there was some aerial bombing outside Kadugli and then, following that, there were some mortar shells landing in Kadugli,” said Damian Rance, a public information officer with the UN humanitarian agency in Khartoum.

Since fighting began in oil-producing South Kordofan in June last year there have been repeated allegations, denied by Khartoum, that civilians have been bombed from the air.

“SAF are now on a big offensive to find these rebels hidden inside the hills,” he said.

Asked about allegations of aerial bombing, he said: “We are searching for them by all means.”

The shelling came after Sudan’s Islamist regime and South Sudan in late September signed deals on security and cooperation that they hailed as ending their countries’ conflict, which led to a border war in March and April.

Among the deals reached under African Union mediation in Addis Ababa was an agreement on a demilitarised border buffer zone designed to cut support for the insurgents.

Sudan accused South Sudan of supporting the SPLM-N, a charge which analysts believe despite denials by the government in Juba.

A Sudan analyst has described the earlier shelling on October 8 as “a show of strength … a big bang” to grab international attention.

The analyst had expected more high-profile attacks before Wednesday’s meeting of the African Union’s Peace and Security Council.

The meeting is set to review an AU peace “roadmap” and implementation of a UN Security Council resolution that ordered a ceasefire between Sudan and South Sudan, and settlement of crucial unresolved issues.

The SPLM-N were allies of southern rebels during Sudan’s 22-year civil war, which ended with a 2005 peace deal that led to South Sudan’s independence in July last year.

SPLM-N has also been fighting in Sudan’s Blue Nile state since September 2011.

The wars in South Kordofan and Blue Nile have affected an estimated 900,000 people, but more than a year of talks has failed to clinch agreement on food aid for rebel zones where “serious food shortages” are reported, the UN said Friday.