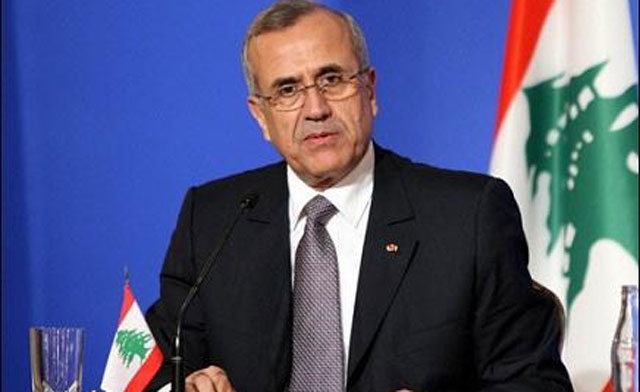 Beirut – Lebanese President Michel Sleiman is pressing for all-party talks on forming a new government amid US pressure for assurances the country will be free of Syria’s influence, his office said on Wednesday.

Lebanon has been in crisis since Friday, when police intelligence chief General Wissam al-Hassan was killed in a Beirut car bombing blamed on Damascus, and opposition leaders have demanded Prime Minister Najib Mikati’s resignation.

A high-ranking official told AFP Sleiman “has begun consultations with the leading figures of the country, in the context of the national dialogue, to discuss the possibility of forming a new government.”

He said that if the envisaged dialogue “were to result in agreement on the form of a new government that can pull Lebanon out of its impasse, then Mr Mikati could present his resignation and the process of forming the government could begin.”

Mikati said on Saturday he had accepted Sleiman’s request to stay on for the time being in the “national interest.”

Sleiman is now canvassing political leaders to assess whether they are prepared to join a dialogue.

The principal opposition March 14 coalition led by former premier Saad Hariri has already said it will not participate in any dialogue until Mikati resigns.

“This government and the parties supporting it are facilitating the plan of the criminal Assad regime in Lebanon,” a reference to Syrian President Bashar al-Assad.

Sleiman has also spoken with Hezbollah, the powerful Shi’a party allied with Syria and Iran, and MP Mohammed Raad told him they are prepared to talk.

And he met with Amin Gemayel, head of the opposition right-wing Falange movement, who was non-committal, officials said.

The United States and the European Union, both anxious to ward off any further Syrian interference in Lebanon, have separately warned against creating a political vacuum.

State Department spokeswoman Victoria Nuland said on Tuesday the “export of instability from Syria threatens the security of Lebanon now more than ever, and it’s really up to the Lebanese people to choose a government that is going to counter this threat.”

And EU foreign policy chief Catherine Ashton, without pointing a finger, said on Tuesday that “there are some who are trying to divert attention from the situation in the region by causing problems in Lebanon.”

The Lebanese official said “their message can be summed up as follows: ‘Come to an agreement on a new government and we will support you. We want to see institutions to continue working and oppose any institutional vacuum.”

US Ambassador Maura Connelly met with Sleiman on Wednesday to reiterate Washington’s support for efforts “to build an effective government and take the necessary next steps” in the wake of Hassan’s murder, the embassy said.

Syria’s ambassador to Lebanon put the blame for Hassan’s murder on Israel and on Sunni extremists after meeting Lebanese Foreign Minister Adnan Mansour on Wednesday.

“I am upset by the accusations being made against my country,” Ali Abdel Karim Ali said. “Syria has nothing to do with this criminal act and has condemned it.”

“Lebanon’s stability is in the interest of Syria, which is facing a domestic crisis and a plot in which intelligence agents of Europe, the world and the region are implicated,” he said.

When asked by journalists if Israel were behind the attack, he said the Jewish state “profits from the destabilisation of Lebanon.”

“I also accuse the takfiriyne (Sunni extremists) who find their interest in chaos,” the National News Agency quoting him as saying.

Hassan’s murder has sparked fears of new inter-confessional strife in Lebanon. Much of the Sunni Muslim community opposes the Assad regime and most Shi’a support him, while Christians are divided.

Hilal Khashan, a political science professor at the American University of Beirut, said he does not believe the government will fall or yield to demands that it resign.

“It could be that the discussions, either in public, or even behind the scenes, might lead to a government of national unity that would incorporate the actual cabinet plus others from the opposition,” he said. “I do not see any other outcome.”