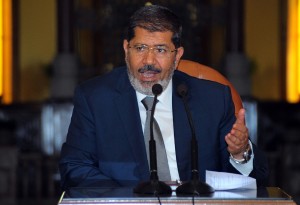 Around 65 political parties and movements have met President Mohamed Morsy in the presidential palace, while other groups stayed away.

The Wednesday meeting was attended by representatives of unions, universities, political groups and by public figures.

A statement released by Hussein Abdel-Ghani, from the Popular Current, reported that 24 political groups rejected the meeting. These include the Socialist Popular Alliance Party (SPAP), the Egyptian Social Democratic Party (EDSP), Al-Dostor, the Justice Party and Kefaya movement.

Tala’at Fahmy, coordinator of the SPAP secretariat, said that he doesn’t believe anything will come of the meeting. He described such events as “decorative meetings.” And that it “has no value, it doesn’t add anything.”

He added that among the reasons for rejecting the meeting is that no agenda was announced.

“The majority of the decisions that come out are distant from the demands and goals of the revolution,” Fahmy said.

Al-Khayat that her party was not invited to the meeting, but dismissed the event and those groups that did attend as “cartoon parties.”

“The only party from the current that were invited was the Justice Party and the EDSP and Al-Dostor. Other parties called on them to reject the invitation and they did,” she said.

Yasser Aly, the president’s official spokesperson was reported by state-run Al-Ahram to have said he “respects all positions but the meeting was an opportunity for dialogue with the president of Egypt.”

He added that all parties, new and old, were invited to the meeting. “We don’t like boycotting, but we respect it,” he said.