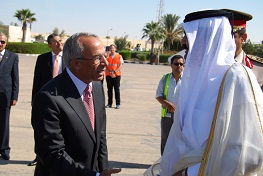 Qatari Emir Sheikh Hamad bin Khalifa Al-Thani visited Cairo on Wednesday to meet with President Mohamed Morsy for the second time since the Egyptian president was elected. The two heads of state met at the Presidential Palace, reported state-owned MENA.

The meeting dealt with a wide range of political and economic issues in an effort to strengthen bilateral ties and cooperation.

The president and Emir addressed regional issues including the crisis in Syria and the Palestinian crisis following the Emir’s visit to Rafah. On Tuesday the Emir’s short trip to Gaza resulted in his inauguration of a $254 million investment project to rebuild areas damaged by Israeli airstrikes. The materials for the construction project will be brought in through Egypt and the Rafah border.

Israel expressed their disapproval of the Emir’s trip to Gaza, claiming that the visit showed that he sided with Hamas, rather than all Palestinians.

The Emir’s first visit to Cairo after the revolution came in August in a one-day trip that mostly focused on investment opportunities. Following the visit, Qatar deposited a $2 billion loan to the Central Bank of Egypt in an effort to supply the Egyptian economy with foreign currency deposits to bolster its dwindling reserves.