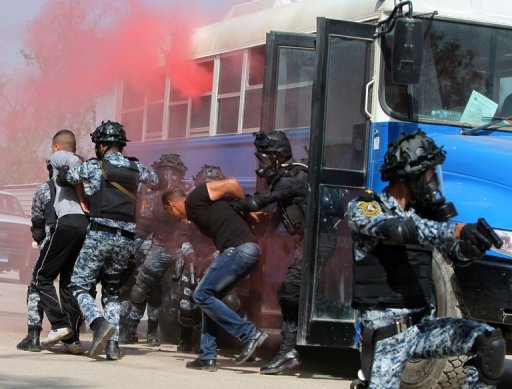 Baghdad – Attacks mostly targeting Shiite Muslims during the Eid Al-Adha holiday, including bombings of a marketplace and a minibus carrying pilgrims, killed at least 16 people in Iraq on Saturday.

The shootings and explosions, which also left more than 40 people wounded, were the latest in a spate of violence in the past week that has broken a relative calm in Iraq, even though authorities had announced a series of moves to boost security during the four-day Eid break.

UN special envoy Martin Kobler condemned Saturday’s violence as “atrocious”, adding in a statement: “The targeting of worshippers is an appalling crime.”

In the east Baghdad district of Maamal, a bomb exploded in a neighbourhood market as women were shopping for groceries alongside their children at around 9:00am.

At least five people were killed, including three children and a woman, security and medical officials said. They added that 13 others were wounded.

An AFP journalist at the scene reported pools of blood along the street, and pieces of shrapnel mixed with vegetables lying on the ground.

Just north of Baghdad in the town of Taji, a magnetic “sticky bomb” attached to a minibus ferrying Shiite pilgrims killed at least five people and wounded 12 others, a security official and medics said.

The doctors warned that the toll could rise.

Officials said some Iranian pilgrims were among the dead and wounded, but it was unclear how many. Differing tolls and details of casualties are common in the chaotic aftermath of attacks in Iraq.

A Shiite car salesman in the town of Muqdadiyah was shot dead, meanwhile, and eight people were wounded by a car bomb targeting a Shiite religious foundation’s offices in the town of Tuz Khurmatu.

Shiites in Iraq typically use the Eid Al-Adha holiday, which began on Friday, to either visit relatives, the graves of dead family members or shrines of key figures in Shiite Islam located across the country.

In the run-up to the holiday, authorities in several provinces, including Baghdad, announced tightened security for the holiday, apparently to no avail.

While no group has yet claimed responsibility for the attacks, Sunni militants frequently target Shiite pilgrims during Muslim holidays such as Eid or Shiite commemoration ceremonies.

In separate shootings, gunmen burst into the homes of Shabak families and killed a total of five people, and wounded four others, including young children, while a bombing in the compound of a family home wounded six.

“The security forces are supposed to be responsible for protecting all the citizens of Mosul,” said Qusay Abbas, a Shabak member of the provincial council of Nineveh, of which Mosul is the capital.

“This is a very troubling attack.”

The Shabak community numbers about 30,000 people living in 35 villages in Nineveh, and many want to become part of the autonomous Kurdish region of northern Iraq.

They speak a distinct language and largely follow a faith that is a blend of Shiite Islam and local beliefs.

The community was persecuted under former Iraqi dictator Saddam Hussein, and after the 2003 US-led invasion they were targeted several times by Al-Qaeda.

Levels of violence have declined dramatically in Mosul and nearby towns and villages, but the city that was once an Al-Qaeda stronghold is widely cited as one of the places where the network’s Iraqi front still holds sway.

At least 49 people have been killed in a week since October 20, more than in the first 15 days of the month combined, according to an AFP tally.

Violence is down sharply across Iraq from its peak in 2006 and 2007, but attacks are still common, especially in Baghdad and north Iraq. At least 250 people have been killed as a result of unrest in each of the past four months.