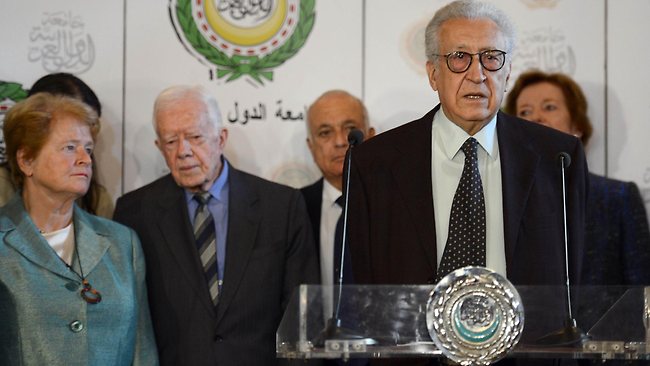 (AFP) – The blazing guns that tore apart the Syria ceasefire attempted by Lakhdar Brahimi will not stop the UN-Arab League envoy from making a new bid to halt the conflict, diplomats said.

Brahimi is expected to come to the UN Security Council in November with new proposals aiming to push President Bashar al-Assad and the Syrian opposition into political talks, UN diplomats told AFP.

The former Algerian foreign minister will head this week for Russia and China — the two leading doubters about international pressure on the Syrian rivals — to discuss the crisis.

The proposed four day truce for the Eid al-Adha Muslim holiday blew up within hours, the government and the opposition blaming each other. Rebels also criticised Brahimi as they did the last peace envoy Kofi Annan.

Brahimi will “come back with some ideas for Security Council activity early next month,” said one senior UN diplomat.

“The political process will not start until Assad and the opposition have battered each other so much that there is no choice. They are not there yet, but Brahimi has some ideas,” added another envoy at the Security Council who confirmed that Brahimi is expected to make proposals within weeks.

“Brahimi never pretended the ceasefire had a high chance of success,” said Richard Gowan, of the Center on International Cooperation at New York University.

“Diplomats at the UN won’t blame him for this failure. Syrian citizens may be less forgiving, but they have surely given up any hope in the UN already. Brahimi can and should soldier on after Eid.”

Brahimi said his ceasefire proposal was only a “modest” initiative and the United Nations and major powers had only given a cautious welcome to the agreement from the government and opposition.

Just as with Annan’s attempted truce in April it did not take long to see that Syria is not yet ready for peace. Nineteen months of conflict has now left more than 35,000 dead, according to Syrian activists.

Little is known of what possible negotiating tactic Brahimi is preparing. But behind the scenes, the United Nations is drawing up plans to quickly assemble a peacekeeping or truce monitoring force if a new ceasefire can be agreed.

It also had humanitarian teams and aid ready to go into the stricken cities of Aleppo, Idlib and Homs if the Eid ceasefire had worked.

“He has to persuade key countries in the Middle East not to support the rebels with arms,” said the senior UN diplomat, speaking on condition of anonymity.

“But if there is to be Security Council action there has to be agreement from Russia and China,” added the diplomat. “If they don’t agree to action then of course Turkey, Saudi Arabia and western nations will step up their help for the opposition.”

Russia and China have used their powers as permanent Security Council members three times to block resolutions that could have led to Syria sanctions.

“There is a growing sense that the US will ramp up support for the rebels after the presidential elections — whoever wins,” said Gowan at New York University. “Brahimi may have to wait for that to gain leverage.”

Western envoys acknowledge that Russia pressed Assad to agree to the latest ceasefire but do not see President Vladimir Putin abandoning Assad.

Few can see Assad making any agreement that would see him stand down. Brahimi told the Security Council in September that the Syrian president wants to “turn back the clock” to the old regime.

“As soon as the regime decides to stop fighting, decides to bring the tanks to bring the army back to barracks, decides to stop this horrendous crackdown it will fall,” said Mouaz Moustafa, political director of the Syrian Emergency Task Force (SETF), a Syrian-American group, who has just returned from a visit to opposition controlled areas.

“A ceasefire that allows for people protests, it is the death knell for the regime,” he added.