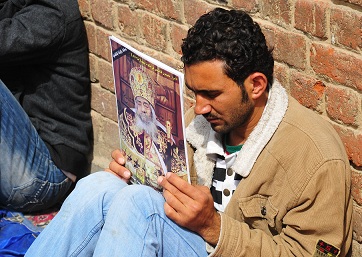 The Coptic Orthodox Church narrows the number of its papal candidates down from five to three on Monday at St. Mark’s Cathedral in Al-Abbaseya.

The election will take place between 2,412 members of the Coptic community including clergy, prominent Christian figures, and laypeople from dioceses all over the world.

Voters will cross out the names of candidates who they do not approve of, and be required to cross out a minimum of two names. Those who want to vote for a single candidate would have to cross out four candidates.

The five candidates have spent the last two weeks participating in liturgies together across the country.

After the selection is announced, the new pope will be enthroned on 18 November at St. Mark’s with members of the Holy Synod, President Mohamed Morsy, other high ranking government officials, and heads of other religious denominations in attendance.

Voting on Monday commences at nine in the morning and runs until five in the afternoon under careful monitoring by church officials.

The enthronement of the Church’s new patriarch will come eight months and one day after the death of Pope Shenouda III, who held the post for more than 40 years.