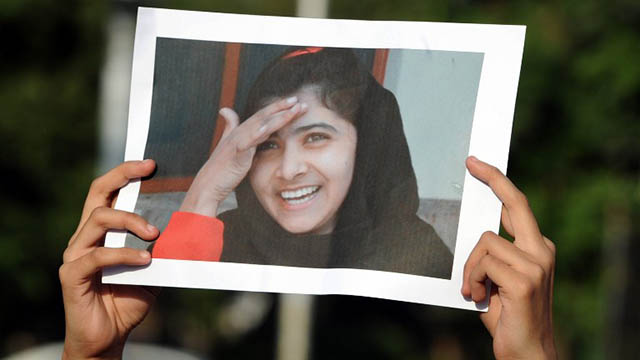 The ministry said the trio also met with the father of 15-year-old Malala, who was shot in the head by the Taliban earlier this month as punishment for campaigning for girls’ education in an attack that shocked the world.

She was flown from Pakistan on October 15 for treatment at a specialist hospital in Birmingham, central England, in an air ambulance provided by the United Arab Emirates (UAE).

“I visited the Queen Elizabeth Hospital Birmingham today to enquire after the health of Malala and to convey messages of good health and best wishes on behalf of the government and the whole Pakistani nation,” said Interior Minister Rehman Malik.

“We are grateful to the hospital authorities, especially the doctors treating Malala, for taking care of her in a most professional manner. As a result, she has made very good recovery in the past few days.”

He expressed gratitude to Britain and the UAE for their support for Malala, who needs reconstructive surgery after a bullet grazed her brain, coming within centimetres of killing her.

British Foreign Minister William Hague said: “Malala’s swift and full recovery is our absolute priority. But we are also determined to do all we can to champion education for women and girls in Pakistan.”

“The people of Pakistan have paid a high price from terrorism and extremism. We will stand by all those who, like Malala, are courageously defending the rights of women, in Pakistan and around the world.”

The UAE’s foreign minister, Sheikh Abdullah bin Zayed al-Nahayan, said his government had provided assistance because its citizens were “appalled” by the attack on Malala.

“She is in our prayers,” he said. “Malala’s courage inspires us to reinforce our commitment to rejecting ideologies rooted in intolerance and extremism.”