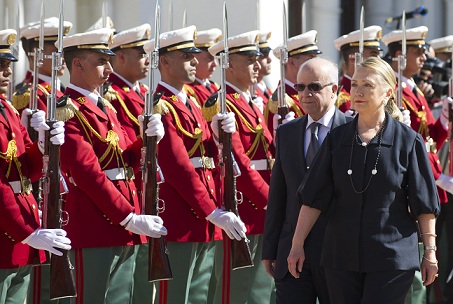 “We had an in-depth discussion of the region and particularly the situation in Mali,” including the “terrorist and drug trafficking threat that is posed to the region and beyond,” Clinton told reporters after her talks with Bouteflika.

She said they agreed to pursue talks and join forces with regional countries, the United Nations, the African Union and the Economic Community of West Africa States (ECOWAS) “to determine the most effective approaches we should be taking.”

The United States and France have launched a diplomatic offensive to secure Algeria’s vital backing for such action in Mali after the UN Security Council urged ECOWAS nations to prepare for a military force against Al-Qaeda in the Islamic Maghreb (AQIM) which is tightening its grip on the north.

This month the council called on West African nations to step up such preparations to re-conquer the territory held by AQIM and other jihadist groups.

“Algeria being the strongest Sahel state became a critical partner in dealing with AQIM,” a US State Department official said aboard Clinton’s plane, which landed in Algiers on Monday morning.

“There is a strong recognition that Algeria has to be a central part of the solution,” he said.

Algeria shares a long border with Mali, where extremists and rebel groups took over large parts of the north after a coup in March.

Algeria, along with Mauritania, has called for dialogue in a bid to reach a political solution, after initially ruling out sending troops.

The common influence among the fundamentalist armed groups ruling northern Mali is AQIM, which originated in Algeria and is active in regional countries including Mauritania.

The Security Council on October 12 approved a resolution urging West African states to speed up preparations for a force of up to 3,000 troops that would attempt to recapture northern Mali.

It gave the ECOWAS until 26 November to clarify its plans.

Algeria, with its powerful army, was at first opposed to any military intervention in Mali, fearing a destabilisation of its territory inhabited by 50,000 Tuaregs.

Since April, AQIM and Tuareg allies Ansar Dine and the Movement for Oneness and Jihad in West Africa (MUJAO) have imposed Islamist Shari’a law in parts of Mali that they have effectively partitioned.

Another State Department official travelling with Clinton said Algeria has been “warming to the idea” of intervention led by West African states.

“One of the things that we’ll be talking about is… the role that Algeria could play if ECOWAS provides the boots on the ground… in coordination with the forces of Mali,” said the official.

But an Algerian Tuareg chief, MP Mahmud Guemama, spelled out why he opposed military intervention, in an interview with Elkhabar newspaper published on Monday.

“What the United States and France are asking will cause a lot of problems,” he said, warning that such action had “colonial objectives.”

“We are more concerned about Algerian towns in the Sahara than northern Mali,” he said. “We know how military intention starts but never know the end. Libya was a good example.”