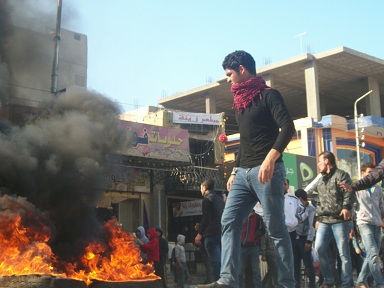 Police have succumbed to pressure from family members of a taxi driver killed by police in North Sinai. The family had been refusing to receive his body until the prosecution office arrested and imprisoned the police officer responsible.

Reports suggest that Mahmoud El-Matary, 20, was shot in the head on Sunday night while trying to escape from the police forces, after he allegedly refused to stop at a security check point in Al-Arish. Police forces chased him and opened fire on his car, which led to his death and the injury of his companion.

The family of El-Matary previously threatened a sit-in in front of North Sinai Court.

North Sinai police commissioned a forensic team to investigate the incident and check the weapons used by the officers at the check point. The decision was taken after the examination of the body and the car and upon asking several eye-witnesses who confirmed that police opened fire on the car. General Ali El-Azazi, deputy head of North Sinai Security, assured that no drugs were found in the car, adding that the officer who opened fire on the car was mistaken and has to be punished.

Khaled Arafat, secretary of Al-Karama Party in Northern Sinai and political activist Mosaad Abu El-Fagr were among those who have visited the hospital in solidarity with El-Matary’s family.

El-Matary’s family and friends blocked 23 July Street, the main street in Arish, in an attempt to put more pressure on the Ministry of Interior and the prosecution office.

Several revolutionary movements and Bedouin leaders are holding an urgent meeting on Monday night to discuss measures to be taken to protect the rights of the driver’s family.

El-Matary’s family said he fled the checkpoint because he had no driving license. They denied he had weapons or drugs in his car.