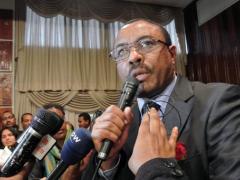 According to court documents, the group is accused of “intending to advance a political, religious or ideological cause” by force and the “planning, preparation, conspiracy, incitement and attempt of terrorist acts.”

The 29 accused – including nine prominent Muslim leaders – were jailed following protests in July staged by Muslims against the government.

Among the accused was Habiba Mohammed, the wife of the former minister of civil service, charged with smuggling funds to support religious extremism.

Demonstrations began in January by Muslims who accuse the government of trying to impose the moderate Al-Ahbash Sufi branch of Islam, a Lebanese import mostly alien to Ethiopia.

Protesters also accuse authorities of fixing elections for the leaders of the Supreme Council on Islamic Affairs, the community’s main representative body, after jailing Muslim leaders who would have participated in the vote.

The courtroom in the Ethiopian capital was filled Monday with armed police officers alongside the 29 accused, who stood before a judge to receive the charges.

Dozens of family members and friends who could not fit inside the courtroom waited outside and cheered as the charged returned to prison on buses.

According to official figures, nearly 34 per cent of Ethiopia’s 83 million people are Muslim.

This month, Ethiopia’s new Prime Minister Hailemariam Desalegn insisted the government respects religious freedom, but said some acts of religious extremism had been uncovered and the government must curb such incidents.