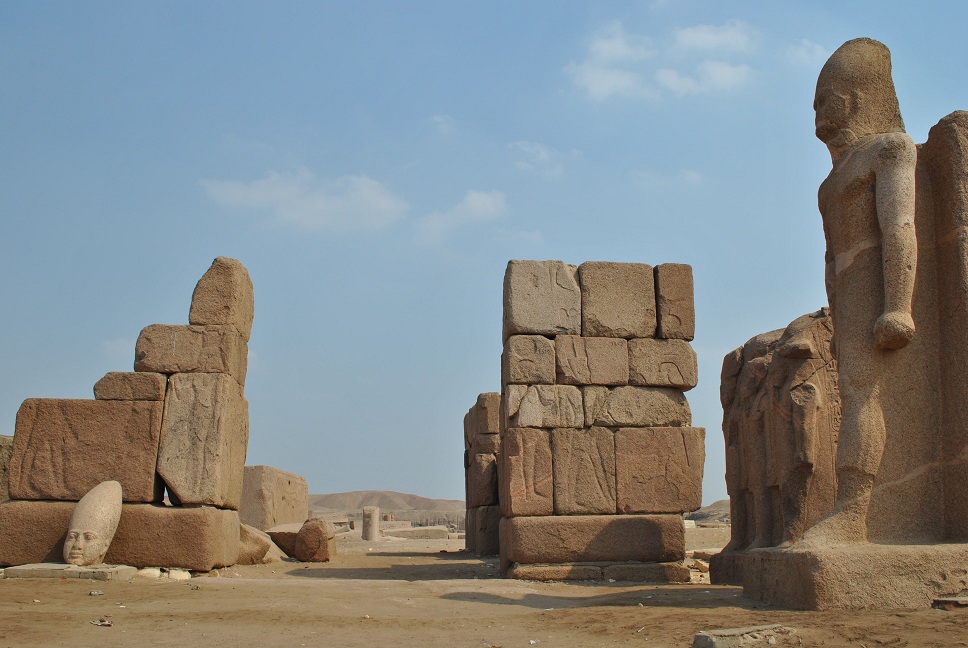 Egypt has been the seat of different civilisations since nearly the beginning of human history. Remnants across the country bear witness of the greatness of its ancients and historical events that changed and enlightened humanity. To this day there are many areas that have not revealed their archaeological secrets and one of these spots is Tanis or San Al Hagar.

San Al Hagar is a village in the Sharqeya governorate. It was the religious and political capital during the 21th and 22th Dynasty of ancient Egypt and in hieroglyphic it was called Sobaat Maht, meaning the big city in the end of the east.

King Semendes, the founder of the 21th dynasty, made San Al Hagar his capital, so he could control the Mediterranean and the politics that came with it. He was followed by other great kings that expanded their control to cover the delta, until King Shenishq founded the 22th dynasty and renamed the capital Tanis.

San Al Hagar remained the main centre of power and seat of the kings for over 145 years, and many stories that are connected to the location are the reason for controversy between historians, like the claim that Moses was raised in this city by King Ramses II.

San Al Hagar was built from sandstone that came from Aswan and it is believed the city was abandoned in the sixth century CE after the nearby lake threatened to flood the town. Its destruction inspired a myth of a fierce battle between the gods Ra and Ammon, but a plausible explanation is that erosion and desertification caused the temples and tombs to be buried under the sand.

The location of San Al Hagar or Tanis was known for several centuries but it was not until around 1860 that the first excavations  started, which have continued on and off until today. Until now five temples have been discovered, for Amon, for his wife Mut and their child Khonso and several others. The sites of a holy lake as well as four wells located close to royal tombs have been found and a plethora of statues of Ramses II and the sculpture depicting the crown of a united Egypt.

“San Al Hagar is the only place in the whole delta where royal tombs can be found,” said Hassan Mohamed, the director of San Al Hagar Monuments. “The site contains two thirds of Egypt’s monuments and there are plans to develop the whole area in order to attract tourism,” he claimed.

The plans include rebuilding the temples that have been found, securing the area with a fence and a main gate and building cinema halls for visitors to watch documentaries about the history of the location. “San Al Hagar has only started to attract tourists three or four years ago but after the uprising and the following political instability the amount of visitors has dwindled to very little,” Mohamed said.

The main obstacle facing San Al Hagar is the infrastructure. “There are no proper roads, hotels or cafes for tourists,” Mohamed said. “Our location is visited by people on a day trip or who pass by on route to somewhere else.”

The treasures of San Al Hagar have not even begun to be unearthed. “What has been discovered thus far in San Al Hagar is maybe 10 per cent of the total area that stretches over 500 acres. I dream of getting more financial and media support,” Mohamed said.

One can only imagine what has been lying patiently waiting to be discovered under the ancient sands of the Egyptian delta.