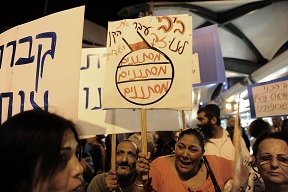 Three human rights organisations accused Israel of refusing entry to African refugees, mostly from Eritrea. They claim that this exposes them to human rights abuses, breaking international law. The report was published online on Sunday.

Human Rights Watch (HRW), the Hotline for Migrant Workers, and Physicians for Human Rights – Israel have said Israel turn away refugees, violating the 1951 Refugee Convention, to which Israel is party.

Article 33 of the 1951 refugee convention states, “No Contracting State shall expel or return a refugee in any manner whatsoever to the frontiers of territories where his life or freedom would be threatened.”

According to the United Nations High Commissioner for Refugees (UNHCR) “more than 80 percent of Eritreans who claim asylum worldwide are recognised as refugees.”

Article 33 also states a refugee must be allowed entry unless “there are reasonable grounds for regarding [a refugee] as a danger to the security of the country.”

Rights groups claim, “Israel is putting them [the refugees] at risk of prolonged detention in Egyptian prisons and police stations, where they cannot claim asylum, of forcible return to Eritrea, and of serious abuse by traffickers in the Sinai region.”

Official Israeli figures show “about two-thirds of those trying to cross the border are from Eritrea,” according to the report. It added, “HRW has documented widespread and severe abuses against people seeking to avoid mandatory and indefinitely prolonged national service on wages barely sufficient to survive, and against adherents of ‘unrecognised’ religions and government critics.”

The report also quotes Eritreans in Israel who confirmed “that many passing through Sinai to reach Israel are facing serious abuses, including torture and rape, by traffickers.”

Eritreans rejected at the border have revealed that Israeli soldiers work together with their Egyptian counterparts in order to forcibly return them to Egypt, after leading them to believe that they had been allowed entry.

Israel has argued refugees are able to register with the Egyptian authorities and Israel has the right to close its border. It claims, “that its obligations toward asylum seekers do not extend to those who are prevented from entering its territory.” The groups responded in their report, “none of these arguments are correct under the Refugee Convention or international human rights law.”

The report included accounts of Eritreans abused by Egyptian and Israel authorities attempting to enter Israel.

The report calls on Israel to “stop rejecting asylum seekers… unless its officials determine in a fair procedure that they do not face threats to their lives or freedom or inhuman and degrading treatment because of that rejection.”