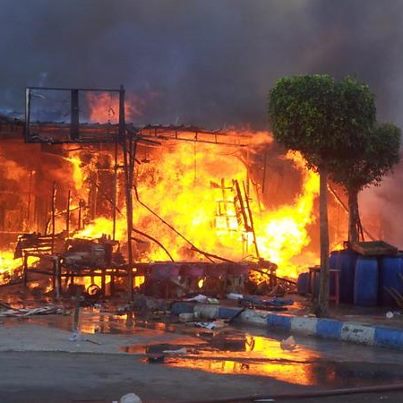 The new governor of Marsa Matruh, promised compensation for damage caused by a fire in the Libya Market on Sunday.

Governor of Matruh, Major General Ahmed Helmy Fathi Al-Hatimi, organised a meeting with shop owners following protests over a fire, which destroyed over 95 per cent of Matruh’s Libya Market. According to Ahmed Zakaria, a member of the Matruh branch of the 6 April youth movement, “the governor promised the workers EGP 5,000 per shop as compensation.”

“Many of the shops have been badly damaged and cannot be rebuilt, so the land now belongs to the original owner of the market,” said Zakaria. “The shop owners are not happy because EGP 5,000 is not enough to cover the damage,” he added. “The estimated cost of the damages has risen from EGP 3 million to EGP 10 million.”

The Daily News Egypt was unable to contact Al-Hatimi’s office.

The governor also met with representatives of the United Revolution Movement of Matruh (Takawa) and the 6 April group in order to discuss the demands made during a month long sit-in in Matruh which ended last week. President Mohamed Morsy ended the sit-in by promising to replace unpopular former governor of Matruh, General Taha Mohamed Al-Sayed.

Zakaria said of Al-Hatimi, “we put to him our demands that we expressed during out sit-in. He told us that he will cooperate with us in order to address the problems.”

Last month’s sit-in demanded the removal of military government officials in Matruh. This demand is not as yet met, as demonstrated by Al-Hatimi’s appointment. Zakaria said that during Sunday’s meeting “we gave him [Al-Hatimi] a list of the 14 men we wanted to be replaced, but he refused. He told us that he cannot remove them if they are working well. If they do not do their work properly, then he will remove them.”

The appointment of Al-Hatimi was met with caution by the groups. Most said at the time they would give the new governor a chance. Zakaria said, “we want him to connect with us more to solve our problems.”