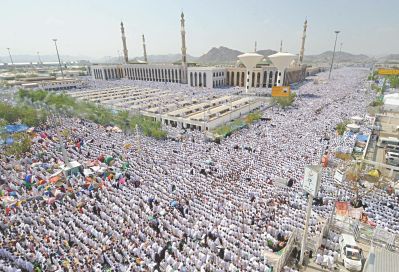 Mecca, Saudi Arabia (AFP) – Muslim pilgrims completed their final hajj rituals in the Saudi city of Mecca on Monday as the annual pilgrimage came to a close without any major incidents.

The Saudi authorities congratulated the pilgrims, who officially numbered 3.1 million, on a “successful” hajj season, despite a large number having entered holy sites without proper permits.

“Everything went very well,” Mecca governor Prince Khaled Al-Faisal told reporters on Sunday, adding that this year’s pilgrimage was “the most successful hajj season ever.”

Last year, nearly three million Muslim pilgrims went on the hajj, one of the five pillars of Islam which must be performed at least once in a lifetime by all Muslims who are able to do so.

Officials said about 120,000 police were deployed throughout the five-day pilgrimage, along with an equal number of health and sanitation employees, in what is considered the largest annual human gathering on earth.

According to Saudi Health Minister Abdullah Al-Rabia, the hajj passed without the spread of any major illness or epidemic.

In September, the UN health agency confirmed a mystery illness from the same virus family as the deadly SARS had caused the death of a Saudi national, though Saudi health authorities at the time downplayed the chances of an outbreak of the illness at the hajj.

The last remaining hajj pilgrims performed the stone-throwing rituals on Monday in the Mina valley where they hurled rocks at three pillars representing Satan.

They then headed to Mecca to perform the farewell circumambulation of the Kaaba, the cube-shaped structure at the Grand Mosque towards which Muslims worldwide pray, before leaving the kingdom.

Though marred in the past by deadly incidents including floods, stampedes and fires, the hajj has become nearly incident-free in recent years because of multi-billion dollar projects.

This year alone, the kingdom spent more than 1.1 billion riyals on development projects in the holy sites of Mina, Arafat and Muzdalifah, all outside Mecca.