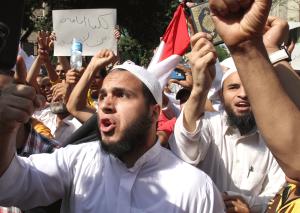 A large crowd of Salafi Muslims disrupted an Eid Al-Adha concert in the city of Menya Sunday night to protest what they perceived to be the promotion of Christianity through the use of hymns. Urging participants to uphold the morality of Islam and the teachings of the prophet Muhammad, the Salafis distributed leaflets titled “a lesson and a warning.”

The crowd surrounded the Menya concert hall, which was hosting thousands of people for the event, within the first twenty minutes of the concert. The concert was meant to be a celebration of Egyptian national unity, with songs titled “the heart of Egypt,” being sung by groups of Christian and Muslim performers.

The Construction and Development Party (CDP) issued a statement afterwards, calling the concert “problematic,” and identifying it as a Christian concert with hymns that violate the Islamic faith. Sheikh Isam Khairy, the CDP spokesperson, said the concert was an attempt by Christians to convert Muslims.

CDP is the political wing of the Gama’a Islamia, a terrorist group-turned political. Their ideology centres around creating a strong Egypt based on Islamic Shari’a.

Al-Aswany asked, “is it in Islam to attack the concert in Menya, destroying signs and stopping people by force?”

Security forces appeared as the concert was ongoing, and asked the performers and the attendants to leave in order to prevent any violence.

In a similar event, following the death of Menya crime boss, Ali Abu Hussein, in October, local Christian communities were threatened by his followers. The Maspero Youth Union issued a statement critical of government’s inaction, saying the president “talks constantly about the suffering of the Palestinians and sends them support, but ignores the suffering of the Copts as citizens.”

On the one year anniversary of the Maspero Massacre, both foreign and Egyptian human rights organisations condemned government inaction surrounding the investigation into the massacre. The Egyptian Initiative for Human Rights called on the government to hold several high-profile members of the Supreme Council of Armed Forces accountable, following an investigation and prosecution.

In September, unidentified men distributed fliers in Rafah telling Copts they had 48 hours to leave the city. The North Sinai governor Al-Sayed Abdel Fattah Harhour announced just days later he would facilitate the relocation of Copts from Rafah to Al-Arish, but made no mention of protecting Copts and their livelihoods in Rafah.