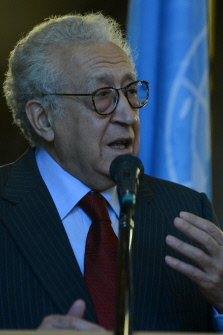 Moscow – Syria’s conflict is going from bad to worse, the UN-Arab League peace envoy said Monday after key talks in Moscow on finding a solution, expressing disappointment that his four-day truce plan had failed.

“I have said and it bears repeating again and again that the Syrian crisis is very, very dangerous; the situation is bad and getting worse,” envoy Lakhdar Brahimi said after talks with Russian Foreign Minister Sergei Lavrov.

“If it’s not a civil war, I don’t know what it is,” Brahimi said after describing a Syrian woman whose two sons were fighting in opposing armies in the conflict. “This civil war must end,” he said.

Russia had thrown its support behind Brahimi’s call for Syrian President Bashar Al-Assad’s army and the rebels to lay down arms during the Eid Al-Adha holiday.

However, shelling and car bombings resumed hours after the ceasefire had been due to take effect on Friday, with each side blaming the other for breaking it. The envoy admitted that they may have been done by rogue groups.

Brahimi said that some bomb blasts “during the Eid period in the civilian population area are definitely terrorist acts by groups we have no contact with,” calling them “definitely condemnable.”

The envoy said the failed appeal will not discourage him from looking for a solution to the crisis in Syria, calling on the international community to “come together and help the people of Syria find a solution to their crisis.”

Lavrov said that Moscow was also “disappointed” that the truce plan was not heard by the opposing sides but said there was no point disputing over who broke the ceasefire.

“They are fighting more and more in Syria, provocations and inadequate responses to them are daily occurrences,” Lavrov said.

However he stressed Russia’s position that the crisis will be resolved once Western powers and regional players like Turkey start negotiating with Assad, not just the opposition.

“Hardly anything will be accomplished without dialogue with the [Syrian] government, and that is the only problem that remains in the path towards a political process,” he said.

Moscow has repeatedly criticised Western powers for what it says are obstructions of peace efforts in Syria and last week alleged that the United States was coordinating arms deliveries to the rebels, which the State Department has called “ludicrous.”

Moscow came under fire earlier this month for delivering radar systems to Damascus on a civilian plane, leading the US to declare its Syria policy “morally bankrupt.”

President Vladimir Putin shot back with a declaration that Russia will trade weapons with whomever it wants, as long as deliveries do not defy UN sanctions.

Brahimi, who became the Syria envoy after his predecessor Kofi Annan quit when his five-point Syria peace plan fell through, is to go to the UN Security Council in November with new proposals to push for talks between Assad and the opposition.

He is also due to visit China.

He had hoped that the Eid truce might lead to a more permanent ceasefire and a political solution of the conflict that has already claimed 35,000 lives in Syria, according to rights groups.