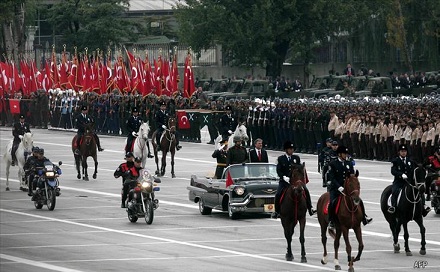 The rally, organised by dozens of civil society organisations and backed by some opposition partie,s began outside the first parliament building in the historic Ulus district.

Some 3,500 police officers were deployed in the area, according to media reports.

The Ankara governor’s office has banned the Republic Day rally, arguing that the state’s security services received intelligence that groups might be planning “provocative” actions.

Republic Day is a national holiday in Turkey but it has in recent years become a platform for opposition groups worried that the current regime is expunging the country’s secular tradition.

The main opposition Republican People’s Party (CHP) and other government opponents have voiced outrage that celebrating the republic’s 89th anniversary should be made into a criminal act.

CHP leader Kemal Kilicdaroglu, who attended the Ankara rally, said: “We will mark the Republic Day despite the pressure.”

The Turkish republic was founded on October 29, 1923 from the ashes of the Ottoman Empire, which spanned six centuries and at its peak stretched from southeast Europe to the Middle East and North Africa.