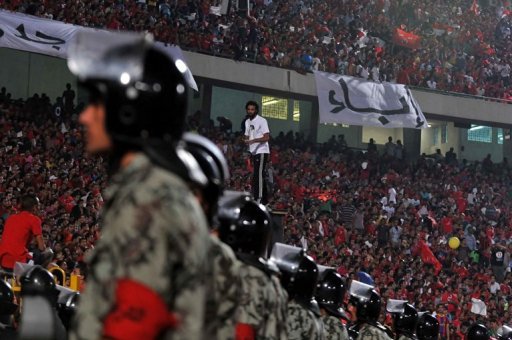 Ultras Ahlawy have accused the Egyptian Football Federation (EFF) of complicity in the Port Said massacre. The group also announced its refusal to attend the first leg of the African Champions League final, scheduled for next Sunday, at Alexandria’s Borg Al-Arab Stadium, despite the Interior Ministry’s announcement that it would allow 20,000 fans to attend.

In a statement on its Facebook page the Ultras accused the federation of falsifying and covering up evidence that would enable those responsible for the massacre to be held accountable. “They are wasting the rights of the martyrs, and then want us to be silent about their rights,” said the statement. “[The federation] is backed by a despicable and rotten media lobby led by demons.”

The Ultras claim the federation influenced the international Court of Arbitration for Sport (CAS), influencing the court’s decision not to impose sanctions.

Anwar Saleh, the former head of the EFF, was labelled an agent for corruption in the statement. The Ultras blame him for a number of corrupt decisions, including allowing Port Said’s Al-Masry Club to independently obtain approval from the CAS to continue to play. Many Egyptian football fans have asserted that the EFF should prevent Al-Masry Club from playing in the EFL for two seasons, as initially ruled.

The group has repeatedly insisted that all domestic competition should be suspended until those responsible for the deaths in the Port Said massacre are held accountable.

The Ultras, along with other Egyptian football supporters, demonstrated their disappointment when appeals were filed to resume play in the Egyptian Premier League (EPL) by holding a sit-in at the Ministry of Sport.

In mid-October the EPL was suspended indefinitely, and the board of the EFF cited the lack of security clearance from the Interior Ministry for the decision.

An ongoing trial is being held against security officials alleged to have been involved in the attack of Al-Ahly’s fans, killing of 74 of them.

The EFF could not be reached for comment on Monday in response to Ultras Ahlawy’s allegations.