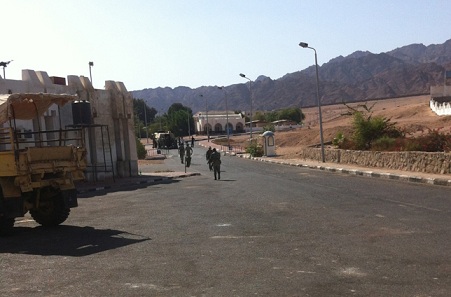 The army sent two armoured vehicles to protect Dahab police station and closed the surrounding roads on Monday. This comes after Bedouins have persisted in calling for the police to hand over a man being held for his own protection.

A local resident from Dahab has said that the army have moved in to protect the police station following attempts by Bedouins to get inside.

Bedouins were reportedly firing guns into the air near the police station on Sunday night. After the shooting had stopped, a group of around 300 Bedouins marched towards the police station. “They were trying to distract the police so they could get inside the station and get the man they wanted,” the local resident said. “The police outside told them to get down, and when they did the police were shooting above their heads to keep them down.” The Bedouins then fled to safety.

As a response, the army sent soldiers to protect the police station from further break in attempts and closed the surrounding roads. On Tuesday  it sent two armoured vehicles to help maintain order in Dahab.

The Bedouins have not returned since Sunday night.

The resident said “The roads are still closed and no vehicles are allowed near the police station. If people need to go that way then they have to leave their cars and walk.”

The man protected by the police is the father of Ehab Reffat, a taxi driver in Dahab. Reffat ran away with 19 year old Zohra Abdullah Gemaa. The pair have been secretly married for six months and it is believed that Gemaa is pregnant.

The Bedouins also marched in smaller numbers on Saturday after the police rescued Reffat’s father from being beaten. He has been under police protection since Saturday.