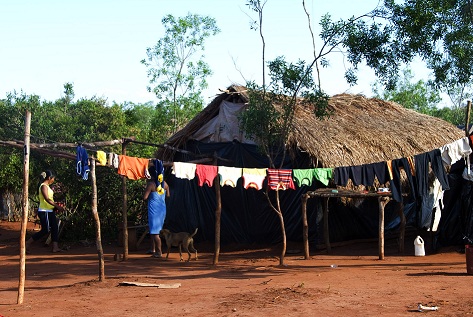 Brazil’s public prosecutor’s office has filed an appeal against the decision by the Federal Court of Navarai to evict one of the indigenous Guarani Kaiowá tribes from their ancestral lands. The decision appeal came after a group of 170 Kaiowá people, one of several indigenous groups in the country, called on the government to come and dig their graves on their land as they refused to leave, dead or alive.

Earlier this month the community released a statement, translated into several languages and circulated around the world, detailing their current condition. “We received word that we will soon be attacked and violently expelled from the banks of the [Hovy] river by the Federal Court of Navarai in Mato Grosso do Sul [MS],” their letter read. “We understand clearly that this decision of the Federal Court of Navaraí-MS is part of the action of genocide and historical extermination of indigenous people.”

“We have already suffered so much and are all massacred and dying at an accelerated pace… As a native and historical people, we have decided collectively to be killed here,” the statement continues.

The Guarani is the largest group of indigenous people in the Amazon, with 46,000 living across seven states. Kaiowá means forest people in their native tongue, and is one of the three subgroups of the Guarani people.

Their plight is complicated by the presence of poachers, loggers, farmers, mercenaries and a near-total absence of law. In many parts of the Amazon illegal loggers clear large swaths of rainforest to make way for illegal roads for the logging companies. The loggers are often armed, violent and enjoy impunity from the law due to the difficulty in finding them. Once the logging companies have cleared an area, fires are often stoked and ranchers move in to claim the land for pasture.

The Kaiowá people have been brutally mistreated by both legal and illegal interest groups, the global indigenous rights group Survival have reported. “It is a commonly accepted fact that these ranchers hire security guards to protect their lands,” Survival’s Brazil campaigner Sarah Shenker explained. By night, these men work as pistoleiros (gunmen) on behalf of the farmers. Over the past decade, countless Guarani leaders have been assassinated by such gunmen – who are known to the tribes-people that see them during the day wearing their security uniforms.

Recently, the sugar boom in the state of MS has led to an increased number of companies, foreign and domestic, settling land. Their use of pesticides and the aggressive nature of the Amazonian farming industry have claimed countless indigenous lives and thousands of square kilometres of land.

According to the Brazilian constitution, indigenous lands were to be demarcated and protected, but the Kaiowá lands are some of the millions of acres that have yet to be mapped out by the government. “This particular land is in the middle of the demarcation process,” Shenker explained. “The demarcation was supposed to have been completed years ago but there have been massive delays, including corruption and ranchers appealing the process.”

Often, Shenker explained, these ranches are either owned by members of the government or by their friends and family, prompting the local government to turn a blind eye to the treatment of indigenous people.

The Guarani once occupied an estimated 35,000 kilometres square of land.

The plot of land being occupied by the Kaiowá is only two hectares (0.02km2) in size, while ranches have occupied over 170 hectares. The ranchers were given land titles throughout the 1950s and 60s and much of the 70s during Brazil’s military dictatorship.

According to government statistics, on average one Guarani has committed suicide every week for the past decade, making them a group with one of the highest suicide rates in the world. Many of the indigenous people are currently living in reserves set up by the government. The people living on such reserves face abysmal living standards whilst they wait for the government to return them to their homes.

Despite their plight, Shenker believes the Guarani are getting stronger and stronger. “In the last few years they have really begun to understand the impact of the media,” she said.